Fire in the Sky

Little more than an extended episode of network television's Unsolved Mysteries, this tale of alien abduction -- based, of course, on the proverbial true story -- is a close encounter of the banal kind. Fire in the Sky relates the experience of Travis Walton, a good ol' boy from Snowflake, Arizona who mysteriously disappeared one night for five days after he and the other members of his work crew came upon a UFO in the woods. It sounds like great fodder for sensationalism and special effects, but Fire in the Sky is disappointedly earthbound. Its narrative disjointed to the point of undermining any suspense, there's little here to titillate. When Travis finally remembers what happened to him during his absence, the resolution of the film's central mystery is somewhat fascinating but ultimately anticlimactic. Most of Fire in the Sky is framed by the suspicions and rumors that began circulating about the role that Travis' friends played in his disappearance; according to the film, their farfetched tale of a flying saucer made them prime murder suspects in the eyes of those who refused to believe the unbelievable. It's an interesting slant on the story, but one that never reaches any depth because the script's characterizations run shallow. The script also suffers from lapses in logic that undermine its credibility. Why would anyone in his right mind stand under a huge, red, glowing object with a stupid smile on his face while everyone else is screaming that he should get back in the car? Why would you first call some crazy UFO fanatics to interrogate your naked, bruised, and dehydrated friend who's been missing for five days, rather than immediately rush the obviously traumatized person to the hospital? And why would you leave a UFO celebrity, fresh from a hospital stay, in the car outside the store while you went inside to buy groceries, so that the passing townspeople can ogle and torment him? Inquiring minds want to know…. 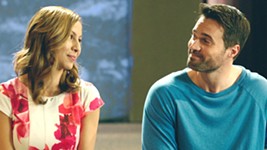