You know what occurs when bad movies happen to good people? The answer is Untamed Heart. You get the feeling that everyone involved in this movie tried like hell to make this artificial heart beat. Ka-thud. Ka-thud. Call EMS; this sucker's going under. Sucker, in fact, is what this movie does best. In that calculated Love Story kind of way, Untamed Heart is a four-hanky weepie. But the only hanky its audience may really want is the kind that rhymes with panky. Handsome hunk Slater stars as shy-guy Adam, the mysterious busboy in the Minneapolis diner where lovelorn Caroline (Tomei) and her feisty pal Cindy (Perez) work as waitresses. We never come to fully understand Adam's whole story. And what we can piece together doesn't really make a whole lot of sense. He doesn't speak at first; we don't know if he's mute, we suspect he may be brain injured. In the movie's opening preamble, we see Adam as a young boy unconscious on the ground and a nun in the orphanage reading him a fanciful story about some baboon king of the jungle removing his own heart from his chest and giving it to his only begotten son (or some such nonsense). We later learn that Adam also had a congenital heart problem as a child and was so weak that he was isolated from the other children. He grew up fairly unsocialized and believing that he has a baboon heart. When we get inside his apartment, we discover that this guy who we presumed to be simple and slow-witted is actually quite well-read and knowledgeable. But it seems to me that a person who can read and digest a book like Catch-22 should also be a person capable of understanding metaphor and symbolic language. Adam can deal only on a literal plane. On a certain level Untamed Heart functions like a modern fairy tale which gives it the freedom to exist on a plane not fettered by realistic concerns. In this respect it is reminiscent of director Bill's debut feature My Bodyguard, a fanciful little wish fulfillment story uncomfortably harnessed in reality. Untamed Heart pointedly captures the story's reality: the daily routine in the dull, dreary diner; Caroline's good, generous heart that's been given too freely and too often and has been dumped on too many times; an attempted rape sequence that's shot so viscerally and so devastatingly that it's terrifying and upsetting to watch. There's also a lot of good acting going on in this movie. Tomei, who was so captivatingly funny (and Oscar-nominated) in My Cousin Vinny proves herself kept adept here at dramatic roles, Perez is relatively restrained in comparison to her signature character performances, and Slater, too, has a winning presence -- even if a good deal of his performance requires him to bus tables and keep his mouth shut. But there's no getting around this dumb script that's just too silly for words. Still, the two burly guys sitting in front of me in the theatre were sniffling pretty good by the end of this tearjerker and I never would have expected that. Me, I found it to be a downer with a capital Demerol. 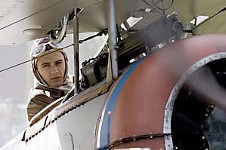 Flyboys
This story of the Lafayette Escadrille squadron, who become the first U.S. fighter pilots, is surprisingly inert.