Produced by University of Texas alumnus (and creator of the Once Upon a Time in China series) Tsui Hark, Ghost Story III is more of a rehash of events from Ghost Story II than it is a continuation of the story in general. As the film opens we find an shorn Buddhist monk and his master successfully entombing the dreaded Tree Demon within the confines of the moldering Orchid Temple. Flash forward 100 years, and a similar priest/acolyte team stumbles into the haunted temple carrying a magical golden Buddha and seeking shelter from the rain. Unbeknownst to the pair, they've stumbled into the lair of the recently resurrected Tree Demon and his gorgeous coterie of evil succubi. Fong (Tony Leung), the naive young monk, soon finds himself battling to keep his vows and his chastity in the face of ghost Lotus's carnal advances. Before long, though, he manages to win her over by virtue of his childlike innocence (and repeated prayers to Buddha, no doubt). Working together alongside Fong's wizened master, the pair enter into battle with the sexually ambiguous Tree Demon, and eventually, well... you know. Like its predecessors, this third installment features bravura special effects: fingernails, eyebrows, tongues, and even earlobes transform into wild, thrashing weaponry as good confronts evil. Spells are cast (amusingly, an incantation's title is spoken aloud as it is cast, “Super-stars... explode!” cries the old man as he hurls a handful of deadly wooden beads at his foe) and enchanted monk's robes become flying carpets at will. The film is cut through with a hefty dose of slapstick humor, especially during the ghost's attempts to seduce the young monk, and the slam-bang, no-holds-barred pacing whips the viewer right along with it. The only problem here is that Hark's Hong Kong fantasy films are becoming so similar that it's getting hard to tell them apart: characters and story lines are so interchangeable that it raises the question: “Do we really need to see this one again?” Thanks for asking, but I think it's time for something new. 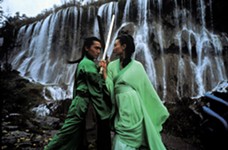 Hero
If Douglas Sirk had made martial arts movies they probably would have looked something like Zhang Yimou's stunning new opus.