This 10-year-old Japanese animated feature is just now being released in the United States, and is based upon the Barefoot Gen comic strip series created by Keiji Nakazawa (who also wrote and produced the film) in 1973 as a semi-autobiographical account of his experiences as a survivor of the atomic bombing of Hiroshima when he was 6 years-old. Nakazawa's story begins with the sweet, melodramatic essence of a Disney tale: 6-year-old Gen lives with his gentle, angelic -- and very pregnant -- mother, his strong, handsome father, and two cute-as-buttons, rambunctious siblings in a state of poverty and famine during the final days of World War II. Times may be hard, but the family endures through the richness of their love for one another, and Gen's parents -- who are openly pacifist -- cling to the hope that the fanatical Japanese government will soon come to its senses, and surrender to the Allied Forces so that life can return to some semblance of normalcy. But this sentimental, cliched prelude comes to a screeching halt on August 6, 1945 at 8:15am in the vivid, apocalyptic nightmare of the A-bomb blast: mangled, incinerated bodies and charred, ghoulish survivors with eyes and flesh melting away litter the gray rubble of a landscape that was once a city. A dazed and confused Gen -- who had been on his way to school -- survives the blast, and rushes back to his family, only to find the remains of his house being consumed by the vast fireball created in the aftermath, and to witness helplessly -- along with his mother -- his father and siblings as they are being burned alive. Yet, Gen is determined to keep his mother, his prematurely-born baby sister, and a young orphaned boy (who becomes a substitute brother) alive in a vast wasteland filled with the omnipresent horrors of death and uncertainty. Although Nakazawa's narrative is moving and riveting, the animation is uneven. At times, it doesn't manage to rise above the Clutch Cargo category of graphic presentation: characters move stiffly -- or not at all -- with the exception of their mouths, and their treatment is cartoonish to the extreme, often lacking individuality. At other times, the animation could almost rival Disney in its fluidity, especially in the sequence depicting the destruction of Hiroshima. A musical score that sounds as though it were taken from a game show or a cheesy soap opera can also be a distraction. Nevertheless, Barefoot Gen is a powerful and memorable anti-war testament. Just make sure that you leave the kids at home for this one. 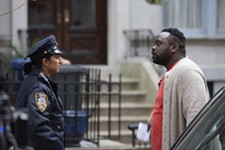