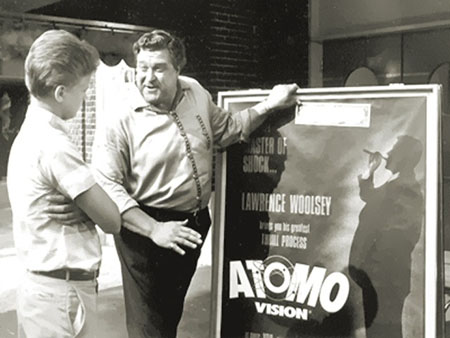 Set against the background of the 1962 Cuban Missile Crisis, at a time when the world found itself in the midst of a cold war grown suddenly all too hot, Joe Dante's (The Howling, Gremlins) Matinee is a fondly humorous look back at the last gasp of America's innocence, being a kid, and, in particular, Monster Movies. Any kid who came of age in the Sixties or even the early Seventies will instantly pick up on all the period artifacts Dante has peppered his film with: Famous Monsters of Filmland magazine, those terrific Aurora plastic monster kits, Lenny Bruce LPs, fallout shelters, and Saturday matinees. Sometimes it seems as though Dante has crammed too much memorabilia in here, but the feeling only lasts until the next bout of “Hey, I remember that!” Goodman plays a William Castle-esque film producer, previewing his new, gimmick-laden horror film (Mant -- “Half Man, Half Ant, All Terror!”) in Key West, up against the admittedly stiff competition of impending nuclear catastrophe. Young navy brat Gene (Fenton), a monster buff whose biggest idols are Vincent Price and Dick Miller, waits to learn whether or not his father will survive the Kennedy blockade of Cuba while simultaneously falling in love, himself, with a wistful, young beatnik schoolmate. And then there's Mant, the film's delightfully on-target movie-within-a-movie (filmed in Atomo-Vision and Rumble-Rama, no less). Featuring all the inexplicably inane dialogue and ham-fisted performances you'd expect to see in a real Sixties-era giant bug flick (and if the musical cues from this sound familiar to you baby boomers, that's because they were appropriated from such great monster movies as Creature from the Black Lagoon, Tarantula, and This Island Earth, among others), Mant is more than a clever facsimile, it's a loving tribute to the genre. To be sure, Matinee is a “light” movie -- there's no socially redeeming “p.c.” message here, and that's the way it should be. Dante has instead crafted a wonderfully fun “matinee movie” of his own, the sort of film I would've called “neat-o” 15 years back. It makes me wish there were more neat-o movies around these days, y'know? 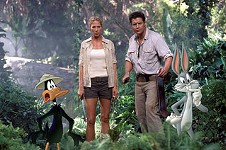 Looney Tunes: Back in Action
Riotous comedy mixes live-action and animation for a great result. 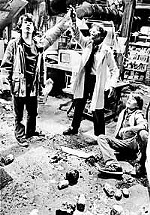