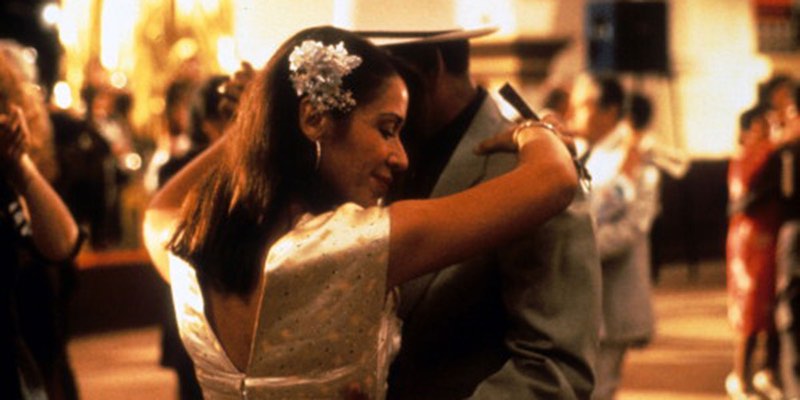 In this dreamy yet focused Mexican feature, a woman leaves her home and her family in Mexico City to embark on a romantic quest in Veracruz only to lose sight of the original subject of her search and, in the process, find something more precious -- her self. The danzón is a popular Mexican ballroom dance, a kind of sensual but precise box step that came to the continent from the Caribbean islands and in which the man and the woman enact a stylized seduction. Julia (Rojo) has been regularly meeting her danzón partner Carmelo every week at the Colonia dancehall in Mexico City. Together they are a prize-winning couple though their relationship does not extend beyond the dance floor. One night Carmelo stops coming and Julia begins to unravel. By occupation Julia is a telephone operator and mother of a teenage daughter. When she hears someone say it's possible that Carmelo may have skipped town for Veracruz, Julia packs her bag and is on the next train to search for this man about whom she knows virtually nothing. Her doomed quest is like an enactment of the yearning lyrics of all the songs that drench Danzón's soundtrack. Once in Veracruz, she discovers a whole new bustling city and makes fast friends with prostitutes, unwed mothers, a curious hotel owner and a couple of drag queens. (Danzón is always at its liveliest when Tito Vosconcelos's campy queen Susy is on the screen. You can be sure that the portrait made a number of Mexico's homophobes squirm.) Following another vague tip, Julia searches the harbor where she meets a handsome, young sailor named Reuben with whom she has an affair. Then she returns home... happy. What Novaro, Mexico's foremost woman director, creates is almost deceptively simple, especially in light of that country's flamboyantly melodramatic narrative film tradition. Danzón is actively non-melodramatic and clear-eyed. What Julia finds on her journey is her long-absent sense of self. As Julia, Rojo is lovely to watch with her sure demeanor and inner strength. Yet, there's a level at which Danzón is a distinctly hermetic Mexican movie that probably speaks more eloquently to the situation of its own countrywomen than to a broader international audience. From our perspective, Julia's journey towards rejuvenation may seem more a Seventies than Nineties-era process. (In an American movie, for example, this same telephone operator might have turned into a character like Mimi Rogers in The Rapture). Ultimately, it's the classic roll in the hay and some stereotypical good loving that gets Julia's mind right again. I suspect that if I were a Mexican woman, I would be stirred to award Danzón additional stars for its meditation on romantic values and the discoveries of unknown places in the heart.