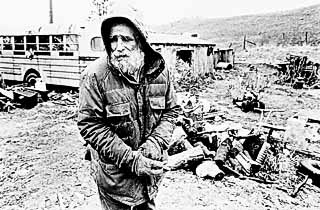 The glaring mistake is last week's Oscar nominations was the Academy's failure to recognize Brother's Keeper as the Best Documentary of 1992. Don't make the same mistake, the same sin of omission. This documentary about the unlikeliest of subjects - an alleged mercy killing amongst the The Ward Boys aren't just a bit peculiar. They're mighty peculiar. Though they range in age from 59 to 71, everyone in their home town of Munnsville in central New York state (population: 499) refers to these primitive dairy farmers as the Ward Boys. Delbert, William, Lyman, and Roscoe live like they have all their lives, on the outskirts of society, in a filthy, ramshackle barn of a house with no indoor plumbing or telephone. They are barely socialized, virtually illiterate, unkempt, unhygienic, slow-witted, never-married bachelors. Then one morning William is discovered dead in the bed he had shared all his life with his brother Delbert. William had, for some time, been in great pain and subsequent to his death, William's bedmate Delbert was arrested for killing his brother. After a night in jail, Delbert confessed to suffocating William, though after his release and despite his signed confession, Delbert maintained his innocence. That's the bare-bones information in this true-life murder mystery. But the story that Brother's Keeper goes after is not the did-he-or-didn't-he, whodunit slant (which, actually, it keeps amazingly ambiguous). In the year that co-filmmakers Berlinger and Sinofsky spent filming the Ward Boys, their trial, and the community and national response, they created a rich document and mediation on a scope of attendant issues catalyzed by the incident. Patently clear from the outset (to everyone but the police and prosecutors) is that Delbert is not a person who should be signing confessions without the benefit of counsel. One townsperson astutely observed that Delbert probably didn't know the difference between waving to someone in the street and waiving his rights. The citizenry of Munnsville came to the immediate aid of this outcast, raising $10,000 bond, hiring a big-city defense attorney, turning out in great numbers to the trial and holding a swirl of fund-raising dances, dinners, raffles and collections for the benefit of the Ward Boys. The Ward Boys may have been outcasts but, as is pointed out, they were Munnsville's outcasts and as such, taken to heart. The outpouring of community response is a large part of the story that Brother's Keeper is trying to tell. Yet there's a level at which we also become aware of how generosity of spirit may be increased by the whir of a movie camera. With the media circus that descended on Munnsville -- even Connie Chung profiles the case and in an especially odd scene we are privy to the Ward Boys at home in their shack watching Chung on the television describing their lives to America -- we see people who previously would never get within 10 feet of the Boys now falling all over themselves to warmly embrace them. We also become aware, as viewers, of our own invasive prurience as we see socially painful things we almost rather would not. This is most in keeping with the documentary tradition of Maysles Films where both the filmmakers worked prior to and during the shooting of Brother's Keeper. The Maysles Brothers were responsible for numerous groundbreaking documentary films like Grey Gardens, Salesman and Gimme Shelter, films whose intrinsic brilliance is in the selection and gradual discovery of their subjects. So fascinating is Brother's Keeper that you almost don't quarrel with things like the biased portraits of the prosecuting team and the Deliverance/i>-like banjo-shuffling soundtrack. Brother's Keeper intrigue factor is enormously high and, it could almost be said, that this movie is good enough to be fiction. 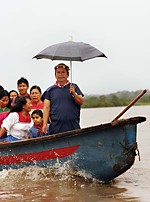 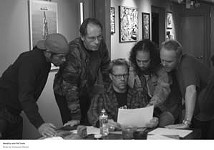 Metallica: Some Kind of Monster
You don't have to be a Metallica fan to enjoy this candid documentary that in essence is a complex chronicle of people just trying to get along.