Chess is the operative metaphor in this new psychological thriller, though the movie could have stood a few pointers in strategy and good gamesmanship. The story centers around a mysterious psycho-killer who is gruesomely murdering women in a small Northwest town which is concurrently playing host to a world-class chess tournament. Arrogant though troubled Grandmaster Sanderson (Lambert) is the fulcrum of the story as he becomes both the murderer's sole contact and the police's prime suspect. Skerritt seemingly wanders in from his stint as small-town police chief on TV's Picket Fences to play (guess what!) a small-town police chief. Psychology intern Lane is flung into the mix to assist these small-town cops perform some serious psycho brain-picking. Soon she's pontificating like an old pro about patterns of serial killers while falling hard and unprofessionally (not to mention, unwisely) for the semi-suspicious Sanderson. Of course, the audience is fully informed in the film's opening sequence who the killer is, so to call this a suspense story is a bit of a misnomer. Still, there are other, more indecipherable plot points that I find more troubling than the mere lack of suspense. Certain events and actions just don't add up. The script is by Brad Mirman, who is also responsible for Madonna's dreadful Body of Evidence which is also in current circulation. Director Schenkel has a penchant for complicated camera set-ups but if he's going to continue to direct narrative features he really ought to exhibit a little more interest in providing his characters with good plot reasons for being in those shots in the first place. Despite all these drawbacks there's still a decent cast wandering through all this and we do get to see real-life husband and wife, Lambert and Lane, do things on screen that (to the best of my knowledge) they previously only did at home in bed. 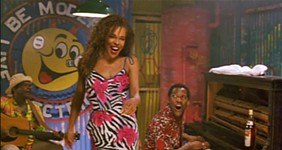