You know how sometimes something can be so bad that it's almost good? Well, that's more or less the case here, with stress on the word “less.” Aiming to be this year's Basic Instinct, Body of Evidence never raises a discernible pulse. The story's intrinsic narrative flaws might be more readily overlooked if the movie had at least the sizzle of a stylish erotic thriller. But the closest Body of Evidence ever gets to anything that might be termed “hot” is when Madonna drips melting candle wax on her defense attorney/boytoy Dafoe's bare chest. Yes, there's some handcuffs (a Valentine's Day present) and some sex, lies, and videotapes and masochism convert Dafoe's sexual ravishing in a parking garage on the hood of a car covered with broken glass. But never is any of this convincingly a) impulsive, b) compulsive or c) erotic. Why? First of all, there's this ludicrous script that constantly puts these characters in untenable situations that have no supportable narrative logic or reason for being. Then, to add injury to insult, you have performances here that are unbelievably flat and uninvolved. Not just Madonna, but the entire cast of players. (Madonna's acting skills have long been a subject of debate. None of her later film work has ever matched the freshness and vitality of her debut film role in Desperately Seeking Susan. Her lack of film success is ever more intriguing in light of her phenomenal success as a self-invented musical star and smart media chameleon.) Part of the problem in Body of Evidence is that you always have the feeling that Madonna is simply playing Madonna, the tarty sexual libertarian/provocateur who has an existence independent of this movie. But none of the players here is able to ignite a spark or convince us of their passion. They all seem bland and flat, emotionally distanced and curiously frumpy. Events bounce back and forth between the courtroom and the bedroom with little change in tone or pace. You don't even get the sense that a valiant effort is being made on any level and we unquestionably expected director Edel (the German-born director of Last Exit to Brooklyn) to better marshall this unseemly mess. Yet there is a certain level (probably mean-spirited) at which Body of Evidence has a definite campy appeal. The audience's hoot and chortle response was at full throttle at the screening I attended. 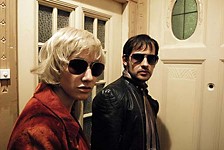 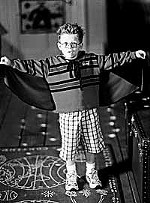 The Little Vampire
Adults may have a hard time swallowing this toothless tale of PG-rated bloodsuckers, but kids may relate better to its lessons about the ostracization of ...