Scent of a Woman

This terribly titled, overly long movie about an irascible, blind man (Pacino) and his green, prep school companion (O'Donnell, previously seen in School Ties and Men Don't Leave) is likely to slip from long-term memory except for the fact that its showcase Pacino performance is being talked up as Oscar caliber. (Pacino, who has never won an Oscar despite frequent nominations, probably stands a good chance this time, given the Academy's recent penchant for awarding best acting Oscars to performers who portray characters with disabilities; i.e. Dustin Hoffman for Rain Man and Daniel Day-Lewis for My Left Foot. It seems to be our new proof of acting excellence.) There's no denying that Pacino's performance is superb. It's filled with all kinds of powerhouse bravura that makes you forget about everything other than “the performance.” That performance, however, is Scent of a Woman's sole selling point. The rest of the movie plays like a bunch of inconsequentially strung together sequences. O'Donnell's counterplot about a young man engaged in a moral struggle with the rich little snits and petty headmaster at his prep school is tedious stuff at best. You keep wondering when Pacino will get back into the picture and blow these spiteful little twerps out of the water. By the climax, when Pacino does invade the sanctum of the school, you're cheering not so much for the story's turn of events but for Pacino's sheer gusto that is sure to break up what otherwise would have been a long, whiny sequence. In its storytelling, Scent of a Woman is highly episodic with the gist of the story telegraphed at the outset. These two characters need each other; over the course of their wild New York weekend together they will improve and educate each other. It's a kind of Ratso Rizzo/Joe Buck type of relationship. Oscar-winning scriptwriter Bo Goldman (One Flew Over the Cuckoo's Nest and Melvin and Howard) overwrote this story, relying heavily on awkwardly poetic speeches and episodic structuring. To the extent that he's delivering a character study, Pacino is able to shine, but the truth about Pacino is that too frequently he's so much better than the movie he's starring in, thereby elevating the project by his mere presence. Scent of a Woman has little more going for it than Pacino's strength of personality. This is no Last Tango in New York. 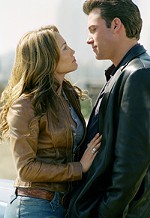 Gigli
Critics and audiences were already primed to hate the laughably monikered Gigli, a film made immediately infamous for marking the start of Jennifer Lopez and ...