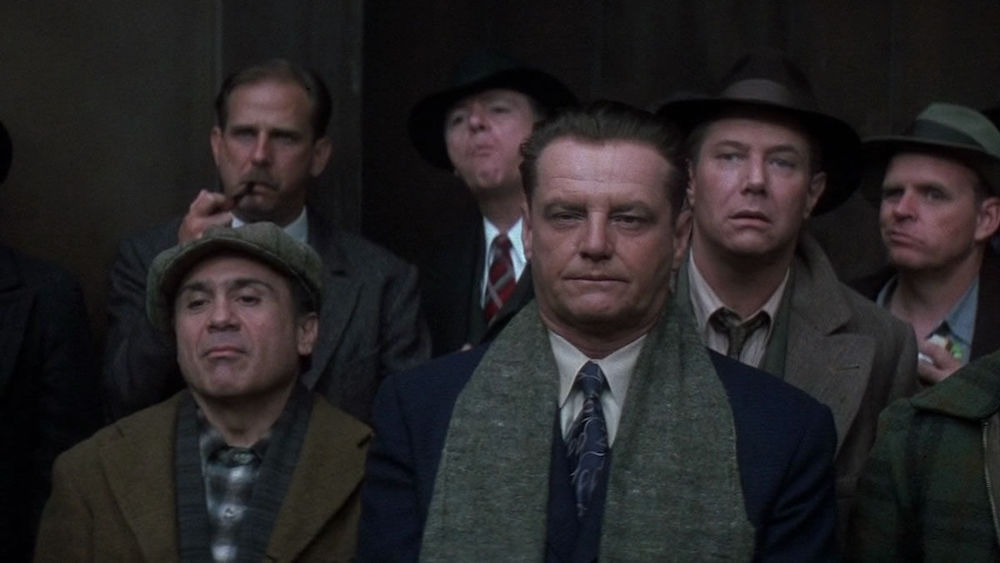 Upon leaving Hoffa, you'll find the legendary Teamster boss just as much of an enigma as you did going in... unfortunately, maybe even more so. Many factors contribute to this state of confusion. Curiously, for a major Hollywood motion picture, Hoffa is incredibly vague and unclear. Too frequently, you find yourself not quite knowing where a scene takes place or who the involved characters are. On a very basic storytelling level, events are startlingly obtuse and in terms of a bio-pic, Hoffa has only a loose connection with history. The Hoffa that the movie portrays is a man of undivided loyalty; his sole passion is the International Brotherhood of Teamsters. David Mamet's screenplay does a good job of humanizing the legend in terms of showing how his bellicosity was both his triumph and his downfall. The very things that made him a successful union organizer and doggged negotiator were also the things that ultimately did him in. What the movie doesn't show in any depth or detail are the more questionable aspects of Hoffa's career -- the mob affiliations, the jury tampering, the dirty politicking. To the extent that they are present, the strong-arm tactics come across more like anecdotal color. Hoffa's take on its subject is that of a man driven by his love for his union. His dalliances in underworld methods were simply means towards an end, that end being the improvement of the lot of working men and women. Even if Hoffa's reverential treatment of the labor leader were not at issue, we would still have to deal with the movie's inadequate storytelling that, on a constant basis, doesn't give you the information necessary to understand the events. On a very basic level, things are too often unclear so that you find yourself puzzled by distracting questions like, “Now, who is that guy?” or “What city are we in?” or “What year is this?”. Director DeVito (who also plays the role of Hoffa's first lieutenant, Bobby Ciaro, a fictional composite character) disappoints in his move from comedic to dramatic director. Nothing about his likable farces Throw Mama From the Train and War of the Roses would have led us to believe that his hand would turn so clunky upon its shift to drama. Especially awkward is the narrative framing device by which Hoffa's career is told in flashbacks as he and Ciaro wait at the roadside diner for that final meeting that never occurred. The transitions in and out of movie present and past are excessively literal and ill-paced. To anyone unfamiliar with Hoffa lore, Hoffa's long, unanswered wait at that roadside diner will play like some kind of elliptical Waiting for Godot. Despite the impediments to narrative flow, you have at the heart of Hoffa a dynamic and highly watchable Nicholson performance. As Hoffa, he captures much of the original's frenetic manner and personal mien, though at moments he seems as if he could be a shoo-in for Jimmy Cagney instead of Jimmy Hoffa. Most viewers, I suspect, will be put off by the lack of information in Hoffa that makes it both inferior drama and biography. Union romance did in DeVito and Mamet, and who did in Hoffa we still do not know. 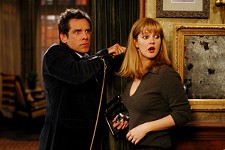 Duplex
Ben Stiller and Drew Barrymore play a young couple is driven batty by a geriatric neighbor from hell.