Winner of the 1992 Sundance Film Festival's Filmmaker's Award, Anthony Drazan's directorial debut is a scorching little story that examines the inherent hazards of an interracial romance that occurs in and around a Detroit high school. Zack (Rapaport) is a young Jewish kid who's spent most of his life growing up in a predominantly black neighborhood. Cruising the blasted and burned sidestreets of inner city Detroit in his Jeep, Zack seems at times less a white teen than some white/black hybrid: he knows what time it is just as much as his black best friend, Dee (Castle) and the object of his desire, Dee's cousin Nikki (Wright), who goes so far as to say that he seems as much a homey as some of her other black friends. When Zack and Nikki hit it off and become an item, the stage is set for a racially charged fireworks display that ends in tragedy. Drazan is an able director, though at times you get the feeling that you're watching an especially slick ABC Afterschool Special; luckily, though, the wit peppered thoughout the script keeps these times few and far between. Leads Rapaport, Castle, and Wright are way above par here, bringing a real sense of camaraderie, love, and eventually, betrayal to their roles – anyone young enough to have been in high school in the last decade will instantly recognize the machinations going on here. Above it all, though, are the pulsing beats collected by music supervisor M.C. Serch, the better half of Brooklyn rap group 3rd Bass. Serch's wall of rap, alongside the jazzy rhythms of Taj Mahal, act almost as another living player in the film, imbuing it with a certitude which surely would have left Drazan's film lacking had it not beethere. 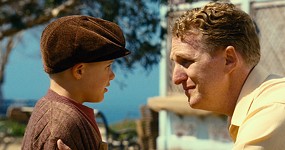 Little Boy
Can the power of faith change the course of history? The Heat
In his follow-up to Bridesmaids, Paul Feig re-employs Melissa McCarthy and teams her with Sandra Bullock for a comedy about a mismatched law-enforcement duo.