History experienced as the personal instead of an assortment of superficial facts to be regurgitated and forgotten becomes a captivating, haunting journey in a superb film adaptation of Graham Swift's contemporary classic novel. Irons portrays Tom Crick, a high school history teacher in 1974 Pittsburgh who is faced with apathetic students, and a barren, unstable wife named Mary (portrayed by Cusack, Irons' real-life wife). Mary's growing, disturbing conviction that God will send her a baby through a “miracle,” coupled with a student's (Hawke) open classroom declaration that history serves no worthwhile purpose, triggers Crick to openly share his own personal history with his students not only as a means to possibly inspire their interest in significant events of the past, but to serve as a cathartic reference point in the re-examination of his life. In stunning, remarkable sequences where the cinematic past and present are juxtaposed through omniscient surrealism, Crick literally takes his students on a stroll that spans two generations of his family's life in England's marshlands near the North Sea -- the Fens -- from the turn of the 20th Century to the early Forties. Gyllenhaal (Paris Trout) skillfully captures -- in conjunction with excellent cinematography by Robert Elswit, and rich art direction by Helen Rayner -- a focused, distinctive sense of the small British community that shaped Crick and Mary's life-long relationship in a manner evocative of David Lean's Ryan's Daughter and John Schlesinger's Far From the Madding Crowd. As well, there are riveting, credible performances throughout the film, notably, those by the actors who portray the young Crick and Mary (Warnock and Headley), Cusack, a well-respected British stage actress who makes her first feature film appearance, and Irons, whose subtle, yet thoroughly engaging portrait of the adult Crick's introspective insight is worthy of an Oscar nomination. Gyllenhaal refers to Waterland as “a world of the mind.” and it is an experience definitely worth exploring. 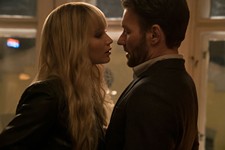