Afraid of the Dark

If Sigmund Freud had directed horror movies they might have looked something like Afraid of the Dark. This British movie uses common childhood fears and anxieties to create a frightening stage on which the subconscious dramas of our young protagonist Lucas (Keyworth) come to life. When first we meet Lucas, he appears to be a quiet boy who lives with his blind mother (Ardant) and policeman father (Fox). His mother teaches knitting at the nearby school for the blind where everyone is on edge because of the recent spate of unmotivated slashings of blind persons. Lucas spends all his time with these sightless people: assisting them, being their eyes and, furthermore, spying on them. Yes, there's a strong voyeurism thematic running throughout this work. When he spys on his mother's blind friend Rose who's decided to pose for some nudie pictures for the local photographer, Lucas comes face to face with the mad slasher in a grisly confrontation. Then all fades to black and the next thing we know, it's Rose's wedding day. In this go-round, Rose has become Lucas' half-sister, his mother has her sight and is, furthermore, pregnant and his father is a florist. Lucas, we learn, is going blind. It is arguable that he is also going insane. From here on out, the movie becomes a big game of hide-and-seek symbols and clues. Does Lucas fear the slasher's razor or the eye surgeon's scalpel? Why does he spy on the photographer, the locksmith and the window washer (who whistles "Three Blind Mice")? What Oedipal whirlwind is unleashed with his impending siblinghood, his cop/florist father and blind, knitting mother? This is the kind of material that a pro like Hitchcock could incorporate into his films, adding immeasurably to the tease without taking anything away from the scare. Afraid of the Dark gets so wrapped up in its psychological dimensions that it forgets the rudiments of suspense. What chills it has are mostly distressingly gory, flash images. The rest is a moving cryptogram. Somehow, this all seems in line with first-time feature director Peploe's previous work. As a screenwriter, he co-authored Bertolucci's award-winning script for The Last Emperor and also penned the director's The Sheltering Sky; he debuted with Antonioni's The Passenger. Enigmatic works all, though some function better than others. Afraid of the Dark peers into childhood fears and invites the boogeyman in for tea and crumpets. 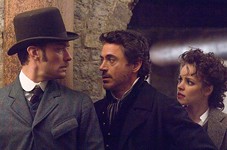