As inspired an idea as it was casting Joe Pesci as the great freelance photographer Weegee, whose brutally realistic tabloid photos of New York City nightlife defined an era, the rest of this film isn't nearly so smart. The protagonist may be a Weegeesque character who shoots Weegeesque photos (they use photos from a variety of sources as well as staging their own) but this is very much standard Hollywood fare; he becomes involved in a complicated web of intrigue. Pesci is fine as Leon “Bernzy'' Bernstein, the Great Bernzini who haunts the dark streets and back alleys of New York photographing the street life, often arriving at crime scenes before the cops themselves. When I was 11 or 12 at my parents' friends' house I discovered a copy of Weegee's most famous book Naked City. Hoping that it would be at least vaguely pornographic, I looked through the book. I was startled at how visceral these photos were; I not only saw the city, I heard it, smelled it, tasted it. Pesci captures the busy energy of Bernzy, though they play him as a failed lonely soul. He's depressed because no one will take him seriously as an artist, treating him, rather, as an ambulance-chasing, freelance photographer. Thematically, instead of just celebrating the vitality of the city, Public Eye tackles weighty questions of art and commerce, constantly searching for a definition of what it is Bernzy does. Rather than hanging in a Runyonesque world of pimps, whores, gamblers, thieves and police (and though we're told he knows everybody, we never see him with anybody unless they're needed to move the plot along) the character is forced into this ludicrous plot involving Hershey as a powerful club owner turning to Bernzy for help. He is so lonely that this appeal from a woman sucks him in, he abandons his most important rule, never get involved. This is silly stuff culminating in a classic Hollywood heroic ending that is just too unbelievable to discuss. This is a dishonest film about an honest artist. The whole tone is wrong, those photojournalists celebrated the gritty, real life of the city. This made-up Black Mask knock-off, shot like a pastel tone poem to a long gone era, is all wrong. They should have just trusted the photographs. 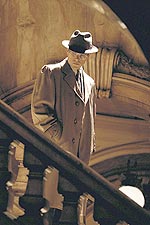