Q: Why a duck? ¶ A: Because the Bad News Bears was already taken. ¶ In The Mighty Ducks Gordon Bombay (Estevez) is the type of lawyer who gives the profession a bad name. We get a taste of his take-no-prisoners litigation style during the film's opening moments. Also, we get a flashback to a crucial missed penalty shot during a childhood championship game -- a primal memory that has obviously shaped his life. Even his vanity license plates read “JustWin.” But those plates offer no protection when he's popped for drunken driving during a Minneapolis snowstorm. Along the way, mention is made of this being something like his twelfth arrest on the same charge. So, to satisfy his five hundred hours of community service, Gordon Bombay (I just love that name, doesn't it sound like some kind of tall, iced, gin refreshment?) becomes the coach of a municipal Pee Wee League ice hockey team. Now this is the type of guy we'd all want supervising our kids. The lessons that Gordon Bombay is going to have to learn before this movie is through are screamingly obvious and predictable. That doesn't stop it from marching ahead with sometimes less than fluid narrative structure. Herek, the director of Bill & Ted's Excellent Adventure should have been capable of tweaking more from this story. I've got to give it credit for one really neat effect that creates the illusion of a puck-cam capturing the POV of a hockey puck as it's hurtling through the air. The rest of the time, The Mighty Ducks may satisfy the Pee Wee hockey players in your household but the rest of you may be turned off by the simplified penance and redemption formula and the “it's not whether you win or lose”-type moral lessons. I can understand why these unknown child actors were involved with this movie but, as for the grown-ups all I can figure is that they were each fulfilling some kind of community service obligation. 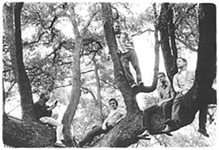