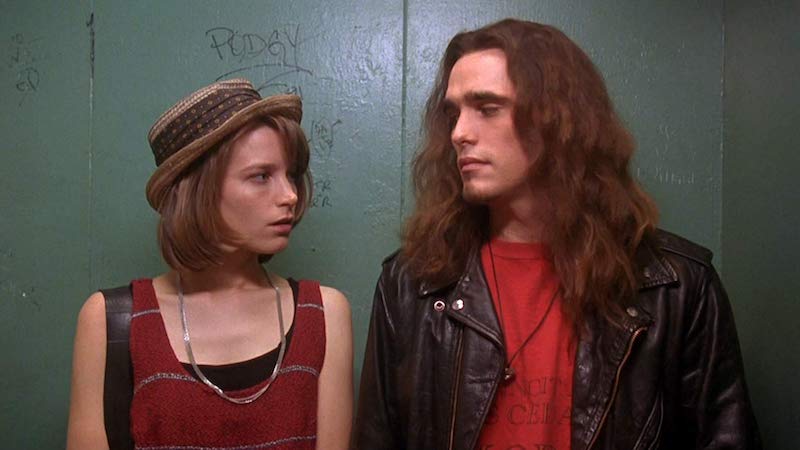 Love in the Nineties: no drugs and the sex is scary. Actually, Crowe documents the habits of a generation that has adapted. Sedgwick and Scott meet, fall in love, and fear to commit. Meanwhile, Fonda nurses an unrequited obsession for Dillon, a selfish, rock-headed young hero in a flannel shirt. Set in Seattle and opportunistically using the hot music scene there as a backdrop, Crowe's film is smug in its certainty it has the most happening territory all staked out. The lives of these characters intertwine in espresso houses, a funky apartment court where most of the characters live, and dark nightclubs. But just because we're told these people are interesting does not make it so, especially in the case of the leads. To us, Sedgwick, as an environmentalist working in a Greenpeace-like organization and Scott, as an equally committed transportation engineer slaving in a city government office, are hopeless morons unfit to reproduce if they can't figure out the basics of communication. It's one of the most annoying scenarios of any love story. The two characters struggle to express their true and undying love for each other but something always goes wrong. For instance, in this up-to-date interpretation, the course of true love is thwarted by a broken answering machine. Probably we're supposed to sigh and say to ourselves, “Oh, if only…,” but, instead, our sighs are those of exasperation. Dillon and Fonda are much more interesting. She loves him desperately, enough so that she thinks about getting breast implants. He indulges her until her interest begins to flag, then he gets serious. Now that's the way love really works. Singles is frequently funny and it respects the less glamorous aspects of its characters' day-to-day lives in a way that is rarely found in movies. Crowe fashions his characters' stories like a kid with a pastepot and Life magazine. Sometimes it works, but more often than not, it's just cute. In the editing, the characters, general style and attitude, Crowe seems to have drawn heavily from Slacker for inspiration, but in his insecure reliance on traditional narrative and Hollywood convention, he undermines his more interesting experimentations. As a result, Singles winds up being a date movie with pretensions.