As in his earlier films The Black Stallion and Never Cry Wolf, Ballard uses his consistently sumptuous visual style in Wind to capture the excitement of yacht racing and its crowning glory, the America's Cup, in this fictional account of the first loss by a U.S. team in the contest's 140-year history. Will Parker (Modine) is a sailor whose life-long dream to compete in the Cup finals dissolves into dishonor when he commits a major blunder, and causes the U.S. team -- led by millionaire skipper Morgan Weld (Robertson) -- to lose the prize to the Australians. Determined to redeem himself and to put the Cup back into the hands of the Americans, Parker catches up with his former sailing partner/girlfriend (Grey) -- and aeronautical engineer -- deep in the heart of the Utah salt flats, where he manages to convince her and her engineering partner/lover (Skarsgard) to assist him in the design and construction of the ultimate racing yacht. All they need is lots of cash, so in steps the wealthy, beautiful but spoiled daughter (Miller) of Parker's former skipper to assist in the investment department. And before you can say “g'day mate,” Parker and his dream machine, The Geronimo, are down under, ready to reclaim the Cup from crafty Australian skipper Jack Neville (Thompson). Although loaded with spectacular shots which convey the rush of seat-of-your-pants sailing and the quiet, meditative beauty of the wilderness, at times the narrative's logic and the course of character development run aground, giving some scenes all the sterility and depth of an AT&T commercial. As well, the film's glorification of the America's Cup as an exclusive prize in The Wealthy WASP World of Sports can be a tad bit alienating. Nevertheless, Wind manages, for the most part, to be harmless entertainment -- a sort of elitist cotton candy floating in the sea breeze. 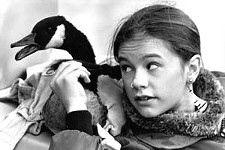 Fly Away Home
In this lovely film, a grieving, 13-year-old girl discovers orphaned geese eggs that she teaches to fly.