This Tim Robbins-helmed political satire about demogougery makes for an appropriate election-season re-release. “The character of Bob Roberts (Robbins) is a folksinger/self-made millionaire/senatorial candidate. He is a rebel conservative who appropriates liberal touchstones of the Sixties and Seventies for his own agenda. He is a money and information monger whose bid for public service is merely a means to personal ends. He is a populist stumping for self-interest. Non-believers call him a ‘crypto-fascist.’ Bob Roberts skirts most of the hard, really substantive issues involved in an election campaign ñ but that may just be one of its points about demagogues.” 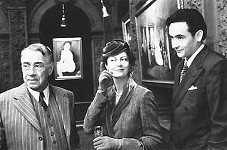 Cradle Will Rock
What considerations, if any, do artists owe those who finance the production and display of their work? This is a big question with many intriguing ... Dead Man Walking
Sarandon won an Oscar for her performance as Sister Helen Prejean in this nuanced story about capital punishment.