Antoine, the hairdresser's husband, has what everyone wants: love, sex and a warm place to sleep. That's all he has, too. He has no ambitions nor dreams except, perhaps, of his past, and his only occupation seems to be filling in crossword puzzles and watching his wife work. And what of her? Of Mathilde we know even less, though she seems blissfully happy as the object of her husband's adoration and lust. The story of these two people begins with the husband's childhood in which he developed an adolescent crush on the town's buxom barber and also a severe case of jock itch thanks to the red wool bathing trunks his mother made him wear. As a result, says Antoine from his vantage point in the future, he became aware of his genitals and the need to take good care of them at a very early age. Freud would not approve. Nevertheless, when Antoine grows to adulthood and finds the right hairdresser for himself, it seems he has found perfect happiness. In their blue-tiled paradise, her little shop with windows along the front and colored glass bottles along the wall, they seem to float in aquatic bliss. So what's wrong with this picture? For us, it's the nagging certainty that there must be trouble in paradise. Oh, we're entertained by the oddball customers and our hero's childhood memories, but what we're waiting for, what is really holding our interest, is our anticipation of the end of the dream. For otherwise, it's almost as if the boy never grew up -- as if life in the barber shop is only a young boy's fantasy rather than a grown man's memory. Both characters stare at each other with such an air of sadness that they seem to know something we don't. They do. And right about the time we're beginning to get a little impatient with them, they let us in on it. The Hairdresser's Husband is a tightly knit, though slight, tale told in the best of humor. It's the story of despair bred by utter happiness. 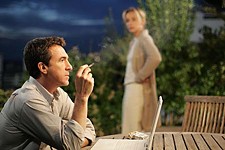 Tell No One
The many pleasures of this riveting psychological thriller from France derive more from the perplexing questions it raises than the discovery of the answers.