In its awareness of where we've been and where we are now, Sneakers is one of the cleverest updates of the caper film to appear in quite a while. It's the work of producers/screenwriters Walter F. Parkes and Lawrence Lasker who wrote WarGames and director/screenwriter Phil Alden Robinson who wrote Field of Dreams. Slick and assured, Sneakers features a team of misfit computer experts whose specialty is breaking into their clients' security systems. The ever-engaging Phoenix doesn't do much work as “the kid” but he manages to steal a scene or two. Strathairn has much more success as a blind oddball whose keen sense of hearing gives him exceptional powers of concentration and knowledge. Poitier is, as usual, uptight. Here he plays an ex-CIA agent exasperated in his daily interaction with conspiracy buff and gadget freak Aykroyd. And Redford stars as the leader of this group of “gifted children” as they are called by McDonnell, the love interest, math expert and piano teacher. Though each of these characters has a past, it is Redford's that comes to haunt them all. In college he and his best friend Cosmo made it their hobby to break into computer systems. First generation hackers, the pair were motivated by political zeal as well as fascination with new technology, and they were caught. Redford escaped to live underground like many Sixties radicals, while Cosmo went to prison. Back to the present, now that every other kid in high school has access to the technology to do what only very gifted college students with access to mainframes could do twenty years ago, Redford's secret comes to light and he's pressured by government types to find a black box decoder that will ensure that no one can keep secrets from anyone. Is this power a gift or a curse? The great paranoid classics of the Sixties and Seventies, Parallax View, Day of the Condor (starring, incidentally, Redford in a similar role), and Mickey One reflected the reality of an era when children, students, became the enemy. Now that the children have grown up, not only have things not improved, but they've become worse. Absolutely no one trusts the government, not even those who have gone to work for it. It's a continuation of the theme introduced in WarGames and it's entertaining, if perhaps a trifle glib. Not all the ceaseless bantering works, not every leap of logic in the story is supported or successfully camouflaged and some of the high tension is undermined by creaky mechanics, but Sneakers is no less fun for all that. There are moments of exhilaration that are fueled purely by James Horner's intelligent soundtrack (featuring Branford Marsalis) and the pleasure of making connections. At a time when conspiracy theories, in their relentlessness, their humorlessness and in their assumption of the monolithic, seem almost to protect the conspiracists by promulgating a sense of hopelessness, Sneakers's sense of fun, by contrast, seems empowering and almost subversive. 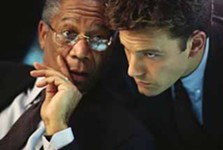 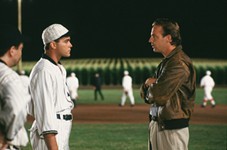