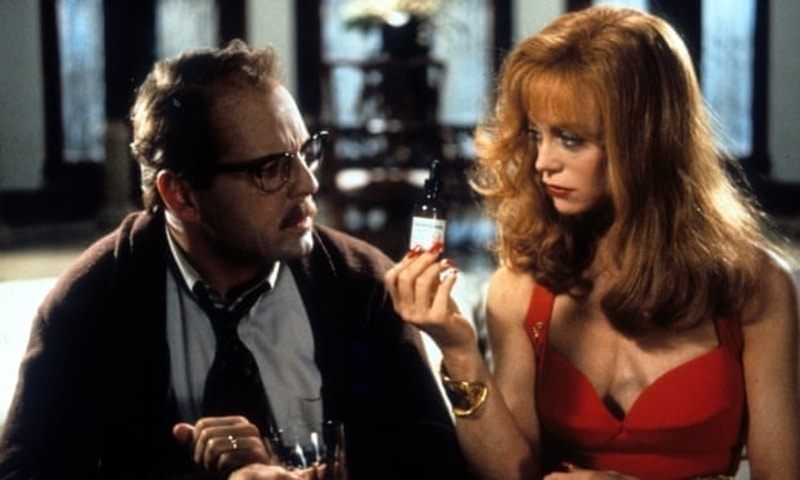 In the movies, black comedy is a difficult proposition: it's a genre more suited to a ten-minute sketch than a two-hour film. For every brilliant black comedy like Dr. Strangelove, there are a hundred duds. Unfortunately, the $50-million-plus Death Becomes Her doesn't quite make the grade either, although its wicked take on modern vanity is often hysterically on-target. (If you think it's too far-fetched, take a look at Michael Jackson today, and then think again.) A morality play about the lengths to which people will avoid growing old, Death Becomes Her sets its Fountain of Youth scenario in Beverly Hills, a place in which beauty is just a collagen shot away. Fading film and stage star Madeline Ashton -- played by Streep with cartoonish vigor as a bitch diva -- isn't liking her reflection in the mirror; her visage has the look of one too many face lifts -- the unflattering crow's-feet, bags under her eyes, and wrinkles around the mouth seem to defy natural law. When offered the prospect of eternal youth by Rossellini, once again playing a half-clothed weirdo, she literally gulps down the chance and a Faustian pact is made. Then it's battle with her rival for life, Helen Sharp (Hawn), a writer who has also discovered the elixir of immortality and who has sworn vengeance on Madeline for stealing every man she's ever loved, including Madeline's present husband (Willis). What ensues is some pretty amazing special effects, particularly one involving a hole in Hawn's midriff section, and a plot that never really takes off, as outrageous as it is. The perpetual catfight between Streep and Hawn's characters, as well as their twisted obsessions with youth, has prompted some critics to characterize Death Becomes Her as misogynistic, but that adjective is too harsh. If anything, the film indicts societal expectations about how women should look. In the self-obsessed world of Death Becomes Her, a world not too far removed from the real one, living well is not the best revenge, but a nip and a tuck may be.