Mom and Dad Save the World

Oh, how the mighty have fallen! Scripted several years back by Chris Matheson (son of Fifties sci-fi icon and Ray Bradbury cohort, Richard Matheson), Mom and Dad... boasts a terrific cast in one of the worst films you may ever have the displeasure of seeing. Yes, it's as bad as you thought it might be (as if the misspelled advertisng blurbs from Parent magazine didn't tip you off right away). One-note wonder Lovitz plays Tod the destroyer, ruler of the galaxy's smallest planet, Spengo, who beams surburbanites Marge (Garr) and Dick Nelson (Jones) to his planet with the intention of making the ditzy blonde mom his queen before he destroys the earth. That's it in a nutshell, but what really gets you is the overall slipshod feel of this gigantic waste of celluloid: scenes come and go without rhyme or reason and talented actors like Idle and Shawn are seemingly here for no apparent reason at all. It doesn't help that director Beeman tries to throw in everything but the kitchen sink, either. We've got death rays and renegade bird men, and gobs of truly awful effects, and...well, I think you're getting my point. The question is, then, was this intended as a sustained parodic riff on those old Flash Gordon serials, or was it meant to be a film for the so-called younger generation (5-8 year-olds)? I don't know and I bet the filmmakers didn't either. Too many canine-faced munchkins and Lovitz-Garr shenanigans do not a comedy make, folks. Kabluey
Oddball tale of a directionless young man who moves in with his sister-in-law, whose husband is in Iraq with his National Guard unit, is quirky but unaffecting. 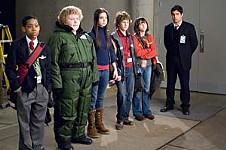