It certainly is the information age. No sooner does the Berlin Wall come crashing down than people cross the border with cameras to record their experiences. One such person is East German director Schönemann who, with her husband, was arrested and jailed after asking for an exit visa. As filmmakers working in DEFA, the East German film bureaucracy, the couple was frustrated because all their projects were turned down. To our minds, trained as we have been by years of anti-communist propaganda, they seem slightly naive. Schönemann says that she kept thinking she would only be in jail a few hours and not for a year as was the case. Her prison roommate reminds her that she actually expected her jailers to apologize. The picture that comes through begins to take on a shape we can recognize, and it's different than we expect. Schönemann, just like the rest of us, starts out believing that people in jails must have done something to get put there and it is her amazement at what happened to her that makes her pick up her camera, cross the border and confront the people who imprisoned her. Does she confront the faces of evil? Hardly. Once again, we meet people like us who are just doing their jobs and who can manage to juggle feelings of compassion for Schönemann's plight without feeling they are in any way responsible for it. There is an obvious temptation to make comparisons to Nazi Germany, and perhaps it would be a terrible mistake to miss those implications, but here, in the U.S., it seems just as important to realize that all humans are capable of explaining away evil acts. Though Schönemann sets out to find the people who informed on her and to confront those who could have stopped the machine's inexorable process, the true story is in her tormentors' implacable innocence. Unfortunately, Schönemann takes her time getting to that point. She can't help but follow the slow torturous path that led to jail. Fascinating and instructive, Locked Up Time is also slow going for much of the time. 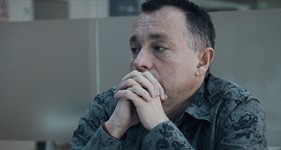