Given the stars, the director and a plot description of this movie, there's no way any review would keep me from seeing it. Keep that in mind, because I wouldn't deny anyone the pleasure of watching these people work even if I don't have a clue what they're up to here. Barkin plays a high-toned singer who's being harassed and threatened by someone while she's in the process of breaking up with her husband. When she meets Nicholson, a sleazy hustler who rents her a guard dog, she's vulnerable and starts to fall for him. Right off we have a few problems because as hard as it is to believe that the earthy and gutsy Barkin is a chorale singer, the fact that she's supposed to be at first timid and unassertive is downright ludicrous. As if in tacit admission of the problem, Barkin soon announces that she's over her timidity and starts kicking people, making us all a lot more comfortable. The information that Meryl Streep was originally tapped to play this role goes a long way toward explaining a few discrepancies. But we're still left with Nicholson who's playing this role from out in left field. He's done such a good job with the less attractive aspects of his character that it's a total mystery why Barkin would fall for the guy. Could anyone be that vulnerable? And yet as confusing as this movie is, it has its saving graces. Carole Eastman, who worked with Rafelson on Five Easy Pieces, returns with considerably less success but there are some stunning moments, great moments, and dialogue that will be repeated. There is a marvelous parade of supporting characters: D'Angelo as Barkin's loopy sister pursued by corporate bad guys in the employ of Stanton, the subject of a tell-all biography by D'Angelo. The dog is great, but his role and his scenes seem to be tacked on. There have been stories of trouble on the set, among them arguments between Eastman and Rafelson and between the actors and Rafelson. If so, the problems seem to show up in the disconnectedness of the story and the actors from one another. As Nicholson says in the film, “Ya gotta listen to me because I'm the only one who knows what the hell I'm doing.” It's almost as if everyone thought everyone else knew what they're doing and maybe they did but they sure weren't doing it together. Nevertheless, though I don't think this movie worked, I'd like to see it again and I think I'd probably like it better. 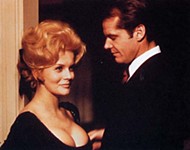 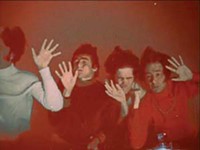 Head
Bob Rafelson and co-conceptualist Jack Nicholson did for the Monkees what Richard Lester did for the Beatles in A Hard Day's Night and Help!, creating a wacked-out, aimless universe that constantly riffs on popular culture.