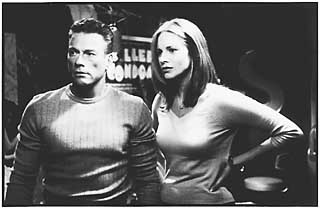 This summer's pumped-up action flick, Universal Soldier may flex its muscles at every opportunity, but it's still second-rate Schwarzenegger. Beginning with a brutal opening sequence filmed on a soundstage jungle masquerading as Vietnam in 1969, it unrepentantly defies logic from start to finish. American (!) soldiers Van Damme and Lundgren simultaneously kill each other during the war, but are inexplicably regenerated afterwards into $250-million-dollar men programmed to serve as members of a bionic SWAT team. Although seemingly perfect because they lack human emotion, there are drawbacks to these universal soldiers: they periodically require injections of a muscle enhancer that looks like antifreeze, and occasionally need to cool their hyperthermic bodies with about 50 sacks of ice. (Of course, these physiological characteristics are never really explained, as if they could be.) As it turns out, the Pentagon has disavowed the top-secret program in which these androids were created. Ultimately, something goes wrong, and Van Damme and Lundgren resume their blood feud from 23 years ago. Along the way, megaton explosions and automatic weapons fill in the movie's gaping narrative holes. Sure, there are a few highlights: Walker's scrappy reporter, a chain-smoking Lois Lane caught in the middle of the mayhem; an above-average chase sequence near the Grand Canyon; Van Damme's bubble butt. As the robotic duo, Lundgren and Van Damme have found roles tailored to their acting abilities. The stone-faced Lundgren, scary as a part killing machine/part high school jock, looks really pissed off all the time, which the boyish Van Damme -- a Belgian kickboxer by birth -- constantly struggles with an American accent and lack of charisma. (The script explains his obviously French inflection as the result of growing up in… Louisiana.) The difference in size between the two is striking; next to the hulking Lundgren, Van Damme is a Brussels sprout. In the film's finale, a fight to the death between these bitter enemies during a rainstorm, the initial domination by Lundgren of the weakened Van Damme is almost sexual, an S&M match between two hunks, one in charge and the other submissive. Of course, there's no question whether Universal Soldier ever intended to depict anything even remotely homoerotic, but you take your subtext where you can find it.