Prelude to a Kiss

The open and accepting audience member is a good audience member, but it's pretty hard to accept another switch movie even when it comes from a director with the credentials of Norman René, who directed Longtime Companion and the stage version of Prelude to a Kiss. This filmed version comes close to making the hoary premise work. Ryan and Baldwin play lovers who are madly, passionately and very physically in love with each other. Unfortunately, those wacky fates step in and on the day of their wedding a confused old man (Walker) wanders in and when he kisses the bride, they, um, switch. René and writer Craig Lucas (Longtime Companion) really don't waste a lot of time with the details here, it just happens, okay? Unsuspecting Baldwin goes off to Jamaica with an old man in a young woman's body, while poor Ryan wanders off to a house in the 'burbs where her body's family lives. The premise, which is sweet and wonderful and certainly laudable, is that love can last beyond sexual attraction and what's left is companionship and friendship. Much of the movie is taken up with Ryan and Baldwin's courtship which is meant to establish their great love for one another. Unfortunately, it doesn't work. Both actors do too much acting and never really connect. As a result we can intellectually accept that their love can survive beyond gender and age, we're romantic mushheads, but emotionally we don't ever really buy it. And having failed to make that leap, well, what's left to make us put up with another switch movie? For a start, there's that amazing suporting cast. Each member gets a quick turn in the spotlight, and Ned Beatty makes the most of his moments. And luckily Ryan and Baldwin do have quite a bit of comic chemistry even if they don't hit on all cylinders in the romance department. Prelude to a Kiss holds its own as a comedy, especially considering the lightweight competition this summer. It's just too bad it never really rises to its promise as a romance. 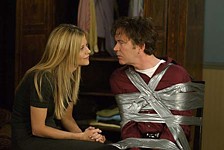 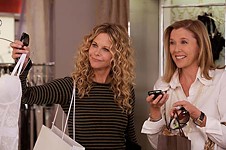