Telling you that I liked Ralph Bakshi's Cool World a whole lot more than I expected to isn't really saying a whole lot for the movie. Based on past experiences with the bad boy of animation in features such as Fritz the Cat, Heavy Traffic, Coonskin, Lord of the Rings, Hey, Good Lookin' and American Pop, it seemed that Bakshi was usually guided by a numbingly raunchy and tasteless pointlessness that overwhelmed his obvious graphic talents. Little surprise then that after a nearly 10-year layoff from movie cartooning that Bakshi's Cool World re-entry finds him back to his old standards. He remains a terrific draftsman but a lousy storyteller. Cool World's plot couldn't be simpler if it were designed for pre-verbal toddlers, which it's not, not even by a long stretch. That PG-13 rating is a joke. Moreover, you'd probably be embarrassed to see this with your kids. Not for anything that's shown, mind you, but more in terms of its general unsavoriness. The basic (and, really, only) idea behind this story is that an ex-con comic book artist, Jack Deebs (Byrne), who created the Cool World series wants to schtup his prize creation, the curvaceous, gyrating sex goddess, Holli Would (Basinger). Holli is an animated wet dream, like a girly-girly prison tattoo come to full-figured life. Her sole ambition is to make it out of Cool World. Toward this end, she breaks the cardinal rule of Cool World, she has sex with a human being (her procreator, no less). Inter-species sex between doodles (cartoons) and noids (humans) seems to be the one thing that's not allowed in Cool World. Enforcement falls to noid cop Harris (Pitt) but it's really not too difficult a task since Harris appears to be the only noid, until Deebs, in Cool World. (Maybe that explains why Pitt looks so out of sorts throughout the whole thing.) This galaxy-bending ought to be the movie's crowning achievement but unfortunately, it's poorly done and thus, undermines its intentions. The interfacing of the two-dimensional and three-dimensional characters is so shabbily accomplished that it makes you start noticing all the other technical glitches in the work. What was most enticing about Cool World was all the stuff happening, literally, around the periphery. It was here that the movie took on its most cartoony feel. Cartoon figures pop out constantly from the movie's perimeters, anvils fall out of the sky crushing cats flatter than pancakes, unknown two and four-legged species spontaneously appear and make goofy sounds and faces. None of this has anything to do with the story. It's all just part of the ambiance of Cool World. When the movie was over my eyeballs ached from the relentless barrage of extraneous activity. It may have made no sense, but it sure kept me riveted. It made me want to do some mind-altering drugs: Your reaction to Cool World may ultimately be proportional to your advance expectations. 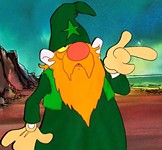 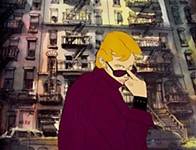