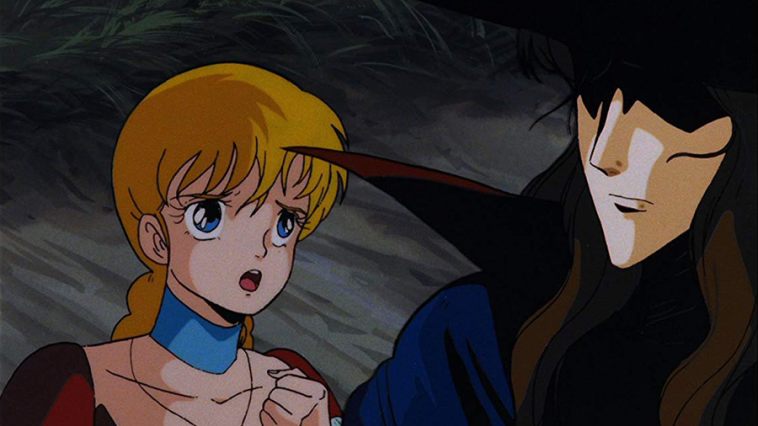 Five years ago, a friend of mine floated me a copy of Vampire Hunter D that had originally been duped from a Japanese laserdisc. Despite countless viewings since, I've still never been able to make too much sense out of this unsubtitled, but otherwise beautiful, piece of animation. Until now that is. Thankfully, the version Dobie Theater will be showing is in English, so the large-chested, round-eyed heroine's name is no longer a mystery to fans of Japanimation (it's Doris [!?], by the way). Set in the (presumably) post-apocalyptic world of 12,090 A.D., VHD takes the viewer into a world where mankind has regressed both technologically and spiritually to the point where the masses are ruled over by power-hungry, lust-crazed vampiric overlords acting as feudal land barons, sucking not only the blood from their charges but also their humanity. Into this rather bleak scene rides the enigmatic Vampire Hunter D, looking and acting more than a little like Clint Eastwood's Man With No Name. As in all good Japanimation, VHD embodies the traditional honor of the people, silently assisting them in their gore-drenched battle to overthrow their fiendish masters, his face passive and expressionless, his broadsword slicing through the vampires and their demonic cohorts like a Red Devil razor blade through an Andalousian eyeball. Ouch. Next to the stunning Akira, VHD is, by far, one of the best of the mid-Eighties crop of Japanimation to reach Austin screens. Unlike The Castle of Cagliostro (with which it's double-billed), though, VHD is a decidedly adult piece of filmmaking: there's gore galore here, and wonderfully curious Japanese animated sex scenes as well. Above all, it's a very gothic piece of work. Long, sullen shots of decrepit manors and foggy moors make this one of the most atypical -- and interesting -- animated films to hit Austin in a long while.