All the Vermeers in New York

This newest work from steadfast American independent filmmaker, Jon Jost, almost breaks out of his arthouse ghetto and into markedly familiar movie strategies like narrative and performance, making this his most engaging merger of experimental and traditional forms. Though Jost here gives greater nod to convention than in previous films, All the Vermeers in New York is still a fiercely experimental work which, as usual, Jost not only directed but also wrote, edited and photographed. Using only available light to compose his shots and shooting with a new fine-grain, high-speed film stock, All the Vermeers is also one of Jost's first forays into 35mm. And much like the Vermeer paintings that Jost uses for his visual and thematic hooks, his movie achieves a similar enigmatic soulfulness and grace, both perfectly composed and lit. The story, as Jost describes it, is an “elegy” for the Eighties, “a decade bathed in delusions and corruption, of both the social body and the individual spirit.” Set in the New York art world of the period, the story is little more than a bare outline. Mark (Lack), a confident and successful Wall Street trader, finds solace from his work in the eternal beauty of the paintings in the Vermeer gallery of the Metropolitan Museum. While there one day he observes Anna (Chaulet) gazing at one of the Vermeers and is moved by her resemblance to the timeless women in the paintings. He passes her a note and thus begins his doomed love. Anna is an aspiring actress, a Frenchwoman who longs to return home. She shares a luxurious Manhattan apartment with Felicity (Phillips) who comes from a wealthy background and insecurely worries whether her inherited stocks are socially responsible and Nicole (Bean), an aspiring opera singer whose incessant voice practice drives Anna and Felicity to oust her from the apartment. Mark and Anna meet several times: the first encounter is a charming sequence with Felicity acting as chaperone/translator for Anna who pretends to speak only French. By their third meeting Anna hits Mark up for $3000 which he gladly gives her, though he'd really rather she move in with him. After a particularly bad day at work (where he's clearly portrayed as some kind of antichrist), Mark visits the Metropolitan and suffers a fatal brain hemorrhage while trying to call Anna from a phone booth. The last shot we see of Anna has her disappearing into a Vermeer painting. So what does this all amount to? 1.) A biting critique of the gloss and the mendacity of the Eighties. 2.) A tightly orchestrated composition that inspires viewers to falsely equate Jost's precise pictorial visions with precise thematic visions. 3.) An empty exercise in the substitution of style for substance. You might guess by now that I'm not a big fan of this work but I must also tell you that Jost is a darling of the arthouse circuit. Like that other unsubstantial film chronicle of Eighties shallowness and greed, The Bonfire of the Vanities, All the Vermeers in New York also documents the self-destruction of the period -- only here it's more like the “Spontaneous Combustion of the Vanities.” 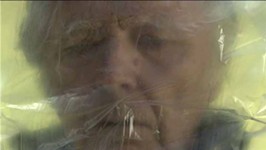