Monster in a Box 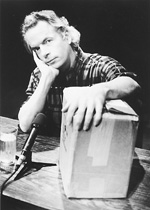 By now, we know the drill. One lone man, on a stage, behind a table, with open notebook, spare set and sparse music by Laurie Anderson. The man is Spalding Gray, the noted monologuist. We last saw Gray's one-man performance work on film in 1987's Swimming to Cambodia, in which he told of his experiences during and leading up to the shooting of his small role in the movie The Killing Fields. There, his impressive powers as a storyteller became widely obvious. It's an amazing thing to witness one person speaking for 90 minutes and holding an audience with few props other than his voice, gestures, synaptic wanderings, comic sense and narrative timing. In Monster in a Box, Gray manages to draw on these same talents to create a self-invented space that welcomes the audience in while imposing his own perceptions on their experience. Gray is quick to tell us at the outset that the monster in the box was his difficult-to-finish autobiographical novel Impossible Vacation. This weighty 1900-page tome (published last month as a comparatively slim 200-plus page book) becomes a prop on the set table as Gray leads us through his writing journey. There are two primary differences between Swimming to Cambodia and Monster in a Box. The first can be summed up in a word: Demme. In Swimming, director Jonathan Demme understood that Gray was the show and kept the camera at a decent range and used minimal, but choice, expressive movements, cuts and lighting. In Monster, Broomfield's camera is all over the place, conspicuously moving in and out and often not being where your eyes need it to be. (At one inexcusable point, Gray introduces an anecdote by pointing to a specific place in the 1900-page monster and saying that he was “here” when the event occurred -- but the camera is still framed in close-up and we'll never know where “here” was.) The other thing that's noticeable about Monster is its lack of focused trajectory -- which is not to say that the points of digression are not interesting or worthy of examination. But in Swimming, you always felt as though you were being swept along to a specific destination, toward a moment of transcendence, if you will. Monster often plays like a protracted case of Writer's Block (and lord knows, a little of that goes an awful long way). Plus, Gray's hysteria over things like his HIV fear while resolutely refusing to get himself tested, plays like unsightly neurotic exposures that some might feel are better left undisclosed. So, the upshot is thus: if you're a fan of Spalding Gray's performance work, you're likely to enjoy this piece despite its structural problems and appreciate the one-on-one engagement between storyteller and audience. If you're inclined to find Gray a tad too precious and self-absorbed, Monster won't do anything to sway you from those beliefs. 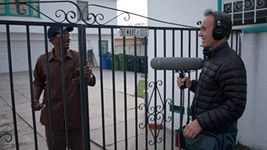 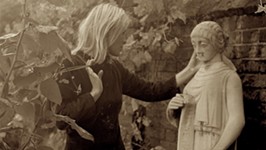 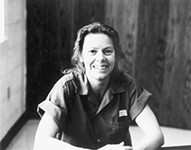