A high concept comedy so pleasurable it's sinful, Sister Act calls for some rejoicing this summer movie season. Despite its predictability and sappiness, this conventional comedy about a worldly lounge singer who masquerades as a nun as part of a witness protection program busts loose as one of the funniest -- and happiest -- films in a long time. Unlike the 1990 British farce, Nuns on the Run, the laughs in Sister Act do not always come at the expense of Catholic ideology. Rather, most of its humor derives from the secular antics of Goldberg, who disrupts the sheltered environment of the convent serving as her hideout. Then again, Goldberg needn't say or do much to make you laugh in Sister Act -- one look at her in a nun's habit is all that's necessary to provoke giggling. Even though this star vehicle is tailor-made to Goldberg's comedic talents (it was initially developed for Bette Midler), it's not a one-sister show by any means. As the perky and enthusiastic Sister Mary Patrick, Nijimy (a regular on cable's Comedy Central) almost steals the movie, while Smith and Wickes perpetuate the stereotype of nuns as stern and crotchety creatures with good-natured aplomb. What makes Sister Act an almost religious experience, however, are the musical numbers performed by the church choir revitalized by Goldberg's showbiz panache. Transcending anything you've ever heard in a place of worship, these performances -- a marriage of pop music and spiritual inspiration -- rock the house with that old-time religion. (After hearing these ebullient renditions, neither “Salve Regina” nor “I Will Follow Him” will ever be the same again.) Indeed, the joy of these musical numbers pervades Sister Act, making it a movie difficult to resist, even for those who don't convert too easily. 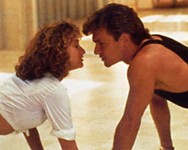 Dirty Dancing
This is one of those re-releases that probably belongs in the "Who Asked for a Rerun Anyway?" file. But, still, I have to admit to ...