Crisscross. No, it's not a bio-pic about the life story of that undistinguished footnote to Austin music history. (Anyway, that would be a film short, not a feature.) Nor is it those new rappers on the block, Kris Kross. It's not even that Robert Siodmak film noir sizzler starring Burt Lancaster, Yvonne De Carlo and Dan Duryea. (Check it out sometime if you're not familiar with it; it's a gem.) What Crisscross is is the newest Goldie Hawn effort (there are more to follow this summer), except that here she's really more of a supporting character than the true star. She plays Tracy Cross, mom to 12-year-old son Chris (Arnott). The story told here is really his, hence the title Crisscross. The year is 1969 and they've been abandoned by husband/dad Carradine who, himself, is traumatized from an inadvertent atrocity he committed in Vietnam. His guilt is so severe that he gets he to a monastery. This leaves Tracy and Chris to fend for themselves as best they can. Chris holds down several part-time jobs, while waitress and bartender Tracy turns to stripteasing to make ends meet. The setting is Key West and the events all take place during the week of Apollo's first moon landing. The basic setup is not bad, though you've seen this plot unfold before. Especially good is Arnott as the kid caught between boyhood and manhood. But then the latter half of the movie disintegrates into a drug dealing caper that is woefully misplaced in this little psychological period piece. Really, even the psychological material is kind of sketchy but that's not to say that it's devoid of affecting moments and small intimacies. Oscar-winning cinematographer (The Killing Fields, The Mission) turned director has a good eye, especially for movement, and has notably captured the dingy underside of the Key West locale rather than the standard lush picture postcard vision. Crisscross is the kind of movie that you probably wouldn't turn off if it were playing on TV while you were puttering around the house, but it doesn't really have much that would make you seek it out. 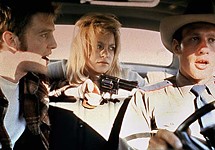 The Sugarland Express
With this first theatrical feature, Steven Spielberg proved he had the right stuff to become America's purest and most accomplished film entertainer. Based on true ...