Winner of Best Musical Score in the 1991 AFI Awards (and nominated for Best Film), Dingo is a jazz-infused tale set in what seems the most unlikely of places to inspire such music: the Australian outback. But, it is this unusual cultural combination which, for the most part, successfully serves as the driving force behind the life and dreams of the protagonist, John “Dingo” Anderson (Friels). A tracker by trade who hunts the Australian wild dogs of prey known as dingoes, “Dingo” Anderson is also a struggling, part-time musician who dreams of breaking away from the dusty outback dancehalls and the Johnny Cash-meets-Herb Alpert-and-the-Tijuana Brass repertoire of his small band, Dingo and the Dusters, for the sophisticated, urban aesthetics of modern jazz. All because of an unforgettable incident from his childhood in which a plane carrying legendary jazz trumpeter Billy Cross (Davis in his first and only film role) makes an unplanned landing in Dingo's remote hometown of Poona Flat, and Cross gives an impromptu performance for the astonished citizens. Rather than allow his unfulfilled aspirations to forever fade into the void of “what might have been,” Dingo -- much to the dismay of his wife, Jane (Buday), and childhood friend, Peter (Petruzzi) -- makes repeated attempts to re-establish contact with Cross in Paris through letters in order to realize his lifelong dream of performing with his idol. However, once Dingo's dream transforms itself into a face-to-face meeting with his idol after 20 years, the narrative's logic is disrupted due to the fiction-reality interface involving the larger-than-life persona of Miles Davis in such a thinly disguised role. Perhaps if a lesser-known actor or musician had been cast as Billy Cross, the last quarter of the film might have been more plausible and less alienating. Nevertheless, Dingo does have its share of worthwhile, memorable qualities, such as Denis Lenoir's (Monsieur Hire and Daddy Nostalgia) rich cinematography which provides a nice contrast between the slick, neon urbanity of Paris nightlife and the primordial beauty of the Australian outback, as well as the atmospheric jazz score which was co-written by Davis and Michel Legrand (and is one of Davis' last recordings before his death in 1991). The actors also give credible performances and blend easily with the naturalness of the outback population. If you are a jazz aficionado, an Australian film connoisseur, or both, Dingo might be the film for you. 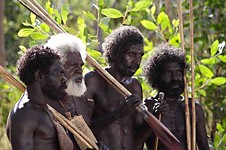 Ten Canoes
Ten Canoes is as much a work of anthropology as it is a narrative, and its true strength lies in its exploration of ancient aboriginal hunting practices, death rituals, and legal traditions. 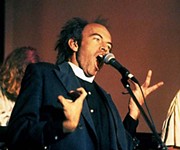