In the language of movies, there's nothing so desolate as a clock ticking in an empty train station. Punctuation comes in the screech of a train whistle and loneliness is emphasized when the train roars by. Train stations in the movies are purgatories, crossroads for souls on the move -- but what about those people who aren't on the move. Rubini, this film's director and co-writer, plays a lonely night stationmaster in a little provincial Italian town. Life for him has few surprises -- in the lonely hours until dawn, he times how long it takes to make coffee and how long it takes a log to burn in his stove. His only concession to dreaming is his nightly study of German, in anticipation of a trip he'll never take. As we all must do, he's made his accommodations with life and he's invested what he does with a sense of importance that it probably doesn't deserve. Thus, every night, when the trains roar by, he stands outside with his lantern to tell them the track is clear ahead and he doesn't think too much about the fact that the track is always clear and the trains would go by just the same. To do otherwise, to indulge in introspection is dangerous. But then, one rainy night a beautiful apparition from another class, another planet, appears. Buy turns up at the station to escape her boorish lover (Fantastichini) and a dull party at his villa up the road. Unfortunately, the next train for Rome doesn't leave until morning, hours and hours away. Yeah, the setup sounds obvious enough, but what happens between this mismatched couple is not at all what's expected. At first, the clock ticks and these two just eye each other curiously. They're drawn to each other as surely as are characters in a Forties romance, but Buy's lover is a wild card. Dangerous and brutal, every time the couple in the station take a step closer to one another, he makes his appearance, in person, on the phone, or in cross-cut scenes of the party where we discover he's trying to rope together a business deal that requires Buy's participation. Rubini's no romantic. It's not love that's driving Fantastichini crazy, it's greed. Is life better when we see it for what it is, Rubini asks; horror stories can come true, but what about fairy tales? This is Rubini's first time out as a film director but he is assured both behind and in front of the camera. Disguising itself as comedy, the film is at first slow to gather force. The early sections are spent developing characters. Toward the end, the film takes a daring leap into suspense and Rubini stays in control and doesn't let these characters forget who they are. These two people don't fade from memory as soon as their images fade from the screen, Neither does the way they look at each other with new knowledge about life and their lives. To call them Adam and Eve is to realize the garden can be located in strange places, even a train station. 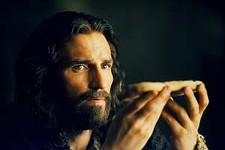 The Passion Recut
In its second coming, approximately six minutes of the original's violence (from the horrific scourging sequences, we presume) have been circumcised in order to appeal ...