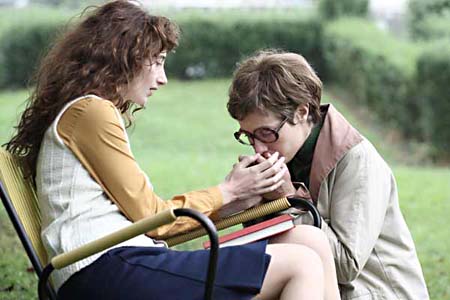 Apparently it's the season for confident, well-executed directorial debuts. Belgian writer/director Van Dormael has crafted a delicious little film that examines -- through flashbacks, mainly -- the life of a now-elderly Thomas van Haserbroek, a man who believes passionately that he was switched at birth with a neighbor child and has thus been denied the privileges and wealth he might otherwise have enjoyed. The three distinct ages of Thomas – young, adult, and elderly – are played to brilliantly by Godet, De Backer, and Bouquet, respectively, though it is the young Godet who is the most compelling. As a boy, Thomas' life story is told mainly from a child's fantastic and imaginative point of view. Mother and father are benign giants, full of love and magic, sheltering the family unit from an increasingly hostile world. When the father dies in a plane crash, Thomas' world begins to take on the dark tones of pre-adolescent confusion – his mother is continually distraught, the neighborhood children are bullies who tauntingly refer to him as “Van Chicken-Soup,” and his only consolation comes from his older sister Alice, with whom he shares his dreams and his youthful passion. Van Dormael's film occasionally echoes some of Truffaut's earlier works but, on the whole, the film is singularly unique in its approach to the telling of one man's life. Cross-cuts, flashbacks, and staccato little forays into the mind of the main character weave the film into a moving tapestry of hopes, fears, and revelations. This is a very dense movie, packed to overflowing with striking images and ideas that apply not only to the film's characters, but also to the audience as well. It is a film about truth, and while it is frequently shocking, disturbing, and hilarious, so is life in general.