To describe Edward II as “high concept” doesn't even begin to nail down its complexity. What British director Jarman has done here is rework Christopher Marlowe's 16th century play in terms of modern sexual politics. Jarman has taken all the latent homosexual subtext in Marlowe's original and brought it front and center -- and then some. Using Marlowe's original dialogue, Jarman has blended this theatrical story of the man crowned King of England in 1307 with contemporary depictions of homophobic repression and gay activism. Once installed as king, Edward II (Waddington) summons his friend and lover, Gaveston (Tiernan), to his side and showers him with gifts, titles and abiding love. His love causes Edward to reject his wife Isabella (Swinton) who, in turn, becomes more distraught and enters a vengeful and adulterous relationship with nobleman Mortimer (Terry). With the help of other scandalized nobles and clerics, Gaveston is banished from England and ultimately brought to his end, followed by the brutal downfall of Edward thereafter. In Jarman's movie, settings go back and forth between sparsely decorated medieval castles and present-day Outrage demonstrations. There is no one period in which this drama is set and, most of the time, there are several eras represented at once. The costuming is a good example of this. While it's never the least bit medieval, the clothing is a constant spectacle, ranging from tuxedos to modern pajamas to Isabella's increasingly elaborate gowns and jewelry. The more she is spurned, the more baroque her dresses and earrings become, looking more like a Dior creation than some castle-bound clotheshorse. Then there are these transfixing moments and compelling images, like when Edward and Gaveston dance a last dance while songstress Annie Lennox sings Cole Porter's “Every Time We Say Goodbye” video-style in the background, a moment rich with resonance and acute awareness. In Jarman's hands, Marlowe's tale of doomed love, revenge and muder becomes more a story about obsessional love and the ugliness of intolerance. In previous films, like Sebastiane and Caravaggio, Jarman had already begun his examination of sexual politics and gay aesthetics. While most of the time Jarman's strategies here create a compelling onslaught of imagery, when the artifice doesn't succeed, the images can appear over-determined and contrived. Also, Swinton's performance as Isabella, though extraordinary, dances along the periphery of misogyny. It is somehow fitting that prior to the screening of Edward II, a brief movie called "Thanksgiving Prayer" by Gus Van Sant, Jr. (My Own Private Idaho, Drugstore Cowboy) is also being shown. Only a few minutes long, the movie is a visual collage accompanied by William Burroughs reading his “prayer” excoriating American hate-mongers and deceivers. The pairing of these two films is just right. 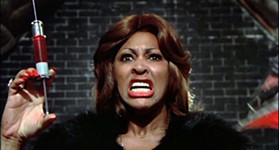 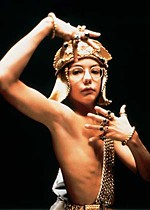