What the heck is it about clowns that makes them so easy to ridicule? Like Spike Lee said, maybe it's the shoes. In his directing debut, stand-up comedian Goldthwait plunges us head first into the seamy world of Palukaville, a town populated by beer-swilling, coke-sniffing clowns from hell. Shakes (Goldthwait) is a children's party clown, tormented by both alcohol and the fact that he lost his big chance to star in a local children's television show to the evil, stunningly unfunny Binky (Kenny), a coked-out, Jokerish parody of bad taste and moral ineptitude. When Shakes' manager is found clubbed to death, all the clues (like the bloody imprint of Shakes monogrammed juggling pin imbedded in the corpse's forehead) point to our jittery hero, and despite all the damn clowns floating around, nobody's laughing. As you may have guessed, this is an exceedingly dark comedy, and much of the film's warped humor comes out of situations that in any other film would be pathetic. Shakes is like Tennessee Williams with polka dots and red rubber noses. It's this very sense of a reality just slightly left of center that makes Shakes the Clown work as well as it does. Goldthwait is great as he trembles and stutters his way from one ghastly screw-up to the next, seeking assistance and understanding from his clown cronies and his girlfriend (Julie Brown), a woman of epic stupidity. Like Tim Burton's surreal Batman, Beetlejuice, and Edward Scissorhands, Shakes has it's own twisted sense of logic, one that's easy to buy into and maintain. The film lags at times -- some of the gags seem hurried and ill thought-out -- but for a novice director like Goldthwait, there are surprisingly few of these rough spots. If you're a fan of clowns and their relentlessly stupid theatrics, this film may not exactly be what you bargained for, but if you don't mind a little scotch and water (and, of course, vomit) with your squirting flower, Shakes the Clown is a wonderfully weird two hours. 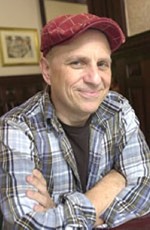 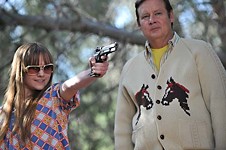