The Power of One

Director Avildsen has one recurrent theme: that of the solitary individual pitted against the insensitive, dehumanizing, oppressive powers of the status quo. From Joe to Save the Tiger to Lean on Me, from Rocky to Rocky V, from The Karate Kid to Parts II and III, Avildsen has always championed the lone warrior tilting at windmills and using physical force to advance idealistic notions of honor, justice and decency. So, too, with The Power of One. Only this time, instead of a rock-solid American type, Avildsen goes with this story set in the 1930s and 40s about an orphaned South African boy of English descent. It's a coming of age story mixed with political drama and based on the semi-autobiographical novel of the same name by Bryce Courtenay. Instead of Burgess Meredith and Pat Morita to guide the young man's growth, The Power of One has Armin Mueller-Stahl and Morgan Freeman (who previously worked with Avildsen as the bat-wielding principal, “Crazy Joe”Clark in Lean on Me) as his mentors -- one for his ethical and cultural development, the other for his physical training and confidence building. Yes, there's a boxing movie at the heart of all this. And what exactly is “all this?” Mostly, it's a long, heavy-handed narrative about the personal costs of South Africa's system of apartheid, set in the removed safety of bygone decades and mixed with generous helpings of Chariots of Fire and Rocky. The movie starts with the birth of PK, our central character, born three weeks after his father was trampled to death by an elephant. As we're told in his treacly voiceover, we witness his mother's breakdown and eventual death as the family farm fails, PK's banishment to boarding school where he's tortured as the only Brit amongst the hate-mongering, Afrikaner schoolboys (they viciously spit in his face and urinate on his little body), his courage and self-confidence are located during a jarring witch doctor's ritual -- all this, and we're not 15 minutes into the movie. Not until Freeman makes his entrance about a half-hour into this ride, does the ambient quality begin to rise. It continues on like this, pitting good aginst evil and right against wrong in pretty contrived and transparent setups. Not that there aren't moments. Avildsen is a master at pulling populist heartstrings, Johnny Clegg provides the African music which is so essential to the movie's plot and the panoramic shots of the veldt are frequently breathtaking. But these things alone do not a good movie make. 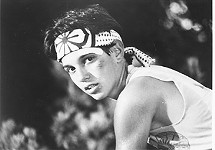 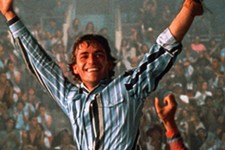 8 Seconds
Based on the true story of rodeo star Lane Frost, director Avildsen (Rocky, The Karate Kid) returns to the thematic territory he knows so well ...