Let Him Have It

London, 1941. The Blitz is on, and buried in the rubble of a toppled house lies 12-year-old Derek Bentley, his skull fractured, his fragile frame racked by a sudden, uncontrollable seizure, his eyes rolled up white in their sockets. Seven years later, Derek is a young man with a tested I.Q. of 66 and a mental age of 11, and because of this, and perhaps also due in part to Her Majesty's need for a convenient scapegoat, Derek will soon become the first man hanged for murder in England despite an overwhelming cry for “mercy” coming from both his jurors and a fuming public in general. Peter Medak, who last year gave us his brilliant study of gangsterism in post-war Britain, The Krays, has succeeded in producing one of the most moving and disturbing films I've seen quite a long time. When young Derek (Eccleston) falls in with a group of young mobster-wannabes, it's only a matter of time before the worst happens -- the audience can see it coming (as can Derek's concerned but ineffectual parents) but are powerless to intervene, and when it does, the travesty of what happens to poor Derek hits you like a rusty pair of brass knuckles. It hurts to know that this is a true story, and that justice is all too frequently no more than a word in a law book. Derek's black-clad friend Chris (Reynolds) is the sociopathic force behind Derek's downfall. When the two find themselves cornered on the roof of a building they were in the process of burglarizing, it's grinning Chris (a la James Cagney, whom he idolizes) who points a gun at the arresting officer. The bobby tells Chris to “Just let me have the gun, son,” and Derek cries out “Let him have it, Chris!” Chris fires, still grinning like a madman, and the officer falls. The question raised then, is this: did Derek mean “Let him have the gun,” or “Shoot him?” The magistrate presiding over the boy's case (played brilliantly by crusty old Michael Gough) glosses over that terribly important aspect of the case, and sentence is passed. The entire cast here is excellent, from Eccleston's Derek to Bell's confused father to Reynold's manic Chris. Every moment of Medak's film rings true, like the knelling of an executioner's bell, and though the end result is a shocking and depressing wallop to your sensibilities, there's no doubt that Let Him Have It will stick in your memory for years to come, just as a triumph like this should. 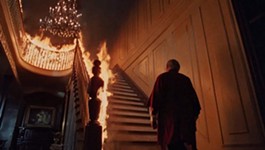