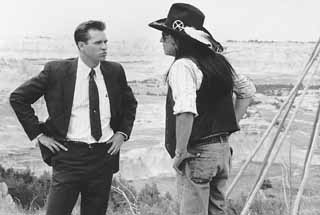 There's much that's interesting about Thunderheart, Apted's take on the period between 1971 and 1978 when AIM (the American Indian Movement) found itself in a war with that subversive organization, the FBI (Federal Bureau of Investigation). Apted, the marvelous documentarist responsible for the 7 Up series, has also made a documentary about Leonard Peltier, the AIM leader unjustly convicted of murder, called Incident at Oglala and in the process has been caught up in a territorial scuffle with Oliver Stone who claimed ownership of Peltier and his story. There are elements of Peltier's story here as well as the Big Mountain issue in which Native American people are struggling with the American government over rights to the uranium on their land. Another member of AIM, John Trudell makes his film debut here playing a character in much the same fix as Peltier. Kilmer plays a Fed with Native American blood but no knowledge or experience of his heritage, who is sent to the reservation to appease the tribes disgusted with insensitive white federal agents and to apprehend Trudell. His partner is a tough, single-minded Fed played by Shepard. Kilmer's shaky credentials are a source of derision for most of the people on the reservation who call him the Washington redskin, but he's befriended by a reservation cop, Greene, a wry traditionalist on a motorcycle who figures Kilmer could do some good if he understood a little bit more about himself and his own history. The activists, here called ARM, are locked in a pitched battle with Fred Ward's army of goons, enforcers who, with the collusion of the Feds hold political power on the reservation by force. Apted manages to say a lot by cutting between the squalor of life on the reservation to the magnificence of the land around it. Unfortunately, when the characters speak for themselves, they are often forced to deliver lines that are unspeakable. There is an element of misty romanticism about Native Americans that Apted just doesn't manage to pull off. His yarn, however, is a good one even if it could be told a little better.