Raul Ruiz is the artist in exile. In his native Chile he studied law, theology and theatre. He studied film in Argentina and travelled to Mexico where he worked as a writer for soap operas before he returned to Chile to make Three Sad Tigers. After the Chilean coup in 1973, he moved to Paris where he has completed over 40 feature-length and short films and is known, largely outside of this country, as one of the most important experimental filmmakers working today. The Golden Boat is Ruiz' first film made in America. In it, Ruiz, with the help of actors from the Wooster Group, Squat Theatre founder Stephan Balint and cameos by directors Jim Jarmusch and Barbet Schroeder, writer Kathy Acker and artist Vito Acconci, turns a bemused eye toward the interactions of New Yorkers. A young student, Muchnik, follows a path of empty shoes and discovers a sad old man, Kirby, who tells him “This is not my place,” before he stabs himself. The student first tries to find help then lifts the old man's wallet, initiating, to his dismay, a complicated relationship with the old man. For far from dying, the old man cheerfully follows the student and stabs everyone the student comes into contact with. Violence escalates as other killers join the parade. It's as if Ruiz, the observer, is actually from another planet and interprets acts of violence between New Yorkers as cordial greetings. According to James Schamus, The Golden Boat's producer and head of film development for the Wooster Group, in the August/September 1990 issue of The Independent: “Violence is not so much hatred, but it is understood by the characters as one of the only ways to communicate with each other. This is the way Americans express themselves through the media.” Ruiz also delights in America's cultural stew. The voluptuous performance artist Annie Sprinkle plays a waitress delivering a sushi dog and wonton enchilada, Mexican soap opera characters leave the TV to join the action (which has a decidedly film noir flavor), and everyone is from somewhere else. Like the killer, Ruiz might say, “this is not my place,” but the artist as observer is at home in alien territory. Visually satisfying and full of wry humor, The Golden Boat is not an easy film, but it is fun. 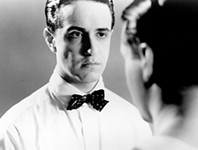 Swoon
This classic of the New Queer Cinema is intrigues with its dreamy romanticism and eroticization of the infamous child murder committed by Leopold and Loeb in 1923.