The National Film Board of Canada's Animation Festival

To celebrate their 50th anniversary of producing animated films, the National Film Board of Canada could have put together a dynamite retrospective; with their support, Canadian animators have been among the world's best and most prolific for decades. What we've got here, though, is essentially a “Best of 1991” compilation, and though it certainly won't hurt Canada's sterling reputation in the field, it's a little thin for a feature film release. Of course, the reason the Film Board puts together such compilations is simple -- if they didn't, then nobody would ever see most of these perfectly nice little films. And that's a shame. Seen in what should be their natural habitat -- one at a time, with feature films or as filler on a cable movie channel -- any of these would be a welcome treat. But those markets, for various economic reasons, just don't exist. So compilations are what we're left with. There are no real clunkers on the bill, but probably only two or three selections that'll go on to be anthologized in other “Best of” collections. (In the absence of other markets, that's pretty much how you judge an animated short's success -- how many video collections it gets reprised in.) Just about every style is represented -- from clay models to traditional cel animation to flowing charcoals and pastels -- though notably absent is the new wave of high-tech computer modeling. Highlights include Caroline Leaf's beautiful, moody Two Sisters; a jaunty meditation on art and commerce based on Van Gogh's $50 million painting, The Irises; and a couple of song-based odes to the Canadian wilderness, Blackfly and Jours de Plaine. But it is telling that most of the real high points in the program come from the five “Classic Moment” excerpts from top late-1980s films (like Oscar-winning George and Rosemary and The Big Snit -- not to be missed, though much better in toto.) All in all, though it pains me to say this, it's hard to really recommend this show to anyone but hardcore animation buffs. 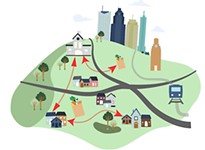