Two by Pratibha Parmar: A Place of Rage, Khush

A Place of Rage is a wonderful opportunity to see and hear the ever-eloquent activist and teacher, Angela Davis, and one of America's most illuminating poets, June Jordan, reflecting on the successes and failures of the black power movement of the 1960s, their identities as feminists and women, and the oppressions that they still struggle against to this day. Oppression is oppression, they argue, whether it be racist, nationalist, homophobic, drug-induced or misogynist. The movie intersperses present-day interviews with Davis, Jordan and writer Alice Walker with documentary footage of the Sixties, musical tracks by current stylists like Prince, Janet Jackson, the Neville Brothers and the Staple Singers, rousing poetry readings by Jordan and commentary by others whom they touch. They speak of the women-based influence of the civil rights and black power movements, of the political leadership of women like Fannie Lou Hamer and Rosa Parks, the women-dominated force of the black church which provided the freedom movements with rallying places and forums. They locate an internal “place of rage” that was evident in the Sixties, an anger stoked by external oppressions that spit back at those forces with a fury and a vengeance. Today they see rage internalized more inwardly and characterized by gnawing futility, massive drug addiction and defeatist resignation. This 52-minute film was made as a TV piece for British television and, as such, it is not quite fair to judge it as a feature film. But whatever its forum, A Place of Rage's testimony, wisdom, compassion and renewal are nuggets that stay with you long after the images fade. The other film on the program, Parmar's short film Khush, has shown in Austin before as part of Dobie's Gay and Lesbian Film Festival. The British film's focus is on the particular experiences of Asian and Indian gay men and lesbians. Using interviews, art, dance and dreams, Khush explores some of the little-explored territory of being gay and of color. 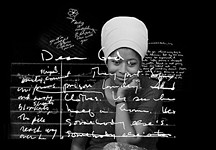