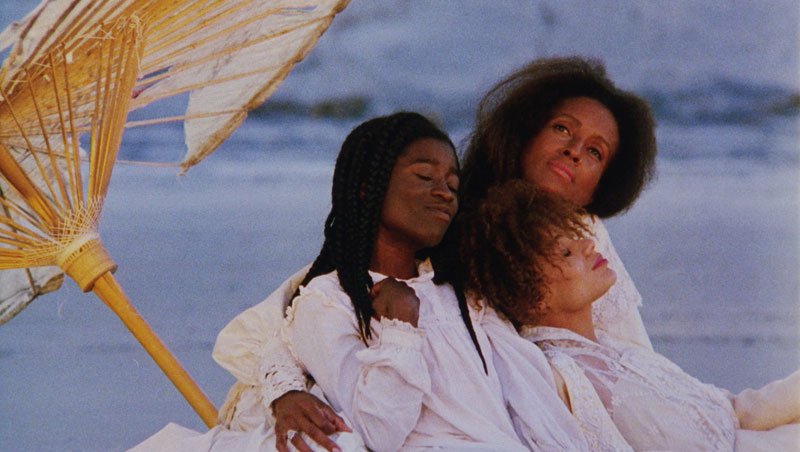 Daughters of the Dust

I'd wager that the portrait of turn of the century African-American women you get in Daughters of the Dust is like nothing you've ever seen before. This richly costumed historical drama focuses on the dreams and remembrances of the extended Peazant family. This clan, with its strong female leadership, inhabits a Gullah Sea Island off the coast of Georgia. They are the descendants of the African captives brought there to work the isolated island wetlands while the white landowners stayed securely on the mainland. There developed amongst these removed African captives, a distinct language called Gullah or Geechee whose vocabulary is primarily English but whose intonations and grammar are predominantly West African. In tandem with their insular speech patterns, there developed amongst this all-black community a resonant culture infused with the rituals, spiritualism, beliefs, symbols and stylings of their West African ancestors. Against this backdrop, Dash devises this tale of the Peazant family who, in 1902, are on the verge of departing their island home and resettling up north. It's at once a story about a specific cluster of people as well as a story about the African-American diaspora. The constellation of characters spans a range of reactions to their migration and dispersal. Nana, the great-grandmother, prefers to remain behind with the “old souls” and her rusting tin can full of “scraps of memories.” Haagar anxiously anticipates their urban migration, wanting nothing to do with her “primitive” African heritage. Viola has traded her ancient tribal spiritualism for heavenly Christian monotheism. Yellow Mary is a tainted woman who worked in Cuba as a prostitute and is on her way to Nova Scotia with her “girlfriend” Trula when she stops in for this final family gathering. Eula is a link between the past and the future. Content either to stay or to go, she carries the next generation within her womb, even though the inseminator might be a white rapist. Daughters of the Dust moves with a lyrical beauty that blends hopes, memories, heritage and generational bonds into the limitless expanse of an island horizon. At times this heady swirl is confusing to follow, though I suspect that Western linear narration was never this movie's goal. The mysterious Gullah accents that concurrently sound both familiar and foreign don't help our Western understanding much either, although they do lend an air of authenticity and poetry to the events. Neither slave nor mammy, junkie nor maid, these dawn-of-the-twentieth century African-American women are an unstereotypical breed unto themselves.