You've got to hand it to first-time director Rifkin: if nothing else, The Dark Backward is a rabidly Nineties type of film. It's as though, instead of utilizing lights and cameras to record his story, Rifkin and crew instead opted for unmitigated despair and grimmer-than-grim, end-of-the-century angst. And more often than not, it works. Nelson has been gleefully cast against type here, as Marty Malt, the most atrocious comedian in the world. With his hair slicked down (sweat or Brylcreem? You be the judge!) and his chief outfit being a creme and avocado rayon leisure suit, Malt and pal Gus (Paxton, in an almost too-over the top performance) are hoping to hit the big time, Malt with his disastrous one-liners and manic Gus via his battered accordion. All seems for naught, though, until Marty suddenly grows a third arm out of the center of his back. Suddenly, unctuous talent agent Jackie Chrome (“King of Las Vegas” Wayne Newton, natch) sees stars before his eyes and makes arrangements for the boys to fly to Hollywood to appear on television with their bizarre act. And from here on in, things only get stranger. Rifkin has fashioned a crawly little movie that underscores the Faustian price of fame in a way that few recent films have managed. Literally all of the major characters are repulsive in their own special ways, with their inner shortcomings indelibly stamped upon their outer physicalities in the most ghastly of ways. Los Angeles is portrayed as one gigantic, seething dung-heap, rife with filth of every nature, animal, vegetable, and, of course, human. Rifkin's only problem here is that, with all the attention being paid to the horrors of The Biz, the inherent reality of the situation gets too shortchanged. Nowhere is this more evident than in Paxton's Gus, a vicious, wily little crud of a man whose every calculated action seems “fake.” Unfortunately, that also resonates in Paxton's acting: he's just too wild to be real. Apart from that, though, Rifkin has crafted a crude, rude fairy tale for our times. Like one of those cartoons by Drew and Josh Friedman, it's horrible all right, but, oh, so on target. 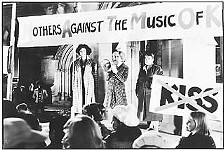