The films of Szabo (Mephisto, Colonel Redl, Hanussen) come few and far between, but so far the wait has always been well rewarded. In the case of Meeting Venus Szabo also gives us a hint of the difficulties he faces in filmmaking. From the very start, he tells us why he bothers. The story follows the progress of a very troubled production of Wagner's Tannhauser in Paris. Arestrup plays the very handsome, very charismatic conductor brought in from Budapest. He is pitted against Close, a diva of the old school, by the directors of the company who are also experts in intrigue and manipulation. When first met, the company is a very ordinary looking bunch of people. However, when they open their mouths to sing, they are transformed. It is this miraculous transformation that Szabo is saying makes it all worthwhile. From the start, the production is plagued by labor problems -- an amazing occurrence for Arestrup who has just come from the Eastern bloc. He's never seen anything like this in the pursuit of art. His chorus keeps walking off in the middle of rehearsals whenever the electronic alarms on their wristwatches tell them it's time for a coffee break. The backstage hands argue over who is to raise the curtain and the seriously unstable set designer is in the process of creating a bizarre soft-porn production with dancers in leather bikinis and blond wigs. Close strolls onto the scene as one more dangerous element in a situation that threatens to totally succumb to entropy. Arestrup is drawn to her even as he is threatened by her. Entropy threatens this film too at times. The private traumas of the individual characters threaten to overwhelm what is at the center a hymn to art. Therefore, it makes sense that it is Wagner that comes to the rescue -- Wagner and Szabo's own wry sense of humor. And in the end, as it is in the beginning, art, not love, conquers all. 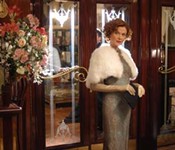 Being Julia
There are so few really great film roles written for middle-aged women that when one comes along and it stars the near-perfect Annette Bening, it’s disappointing that the rest of the movie does not equal her performance. 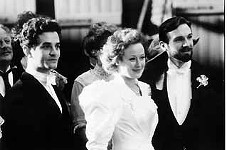 Sunshine
A family epic that spans three generations as much as it is the story of a century, Sunshine has the kind of sweep and scope ...