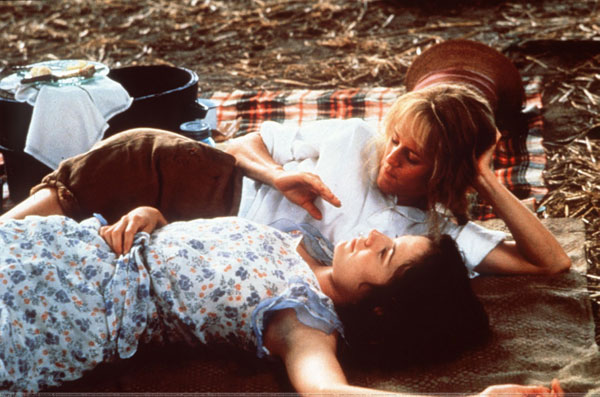 There's a lot to like about Fried Green Tomatoes. The movie, that is. Foremost is the acting. Brimming with wonderful performances, the movie is remarkable for its collection of rich female leads (the screenplay was co-written by Fannie Flagg and director Avnet from Flagg's 1987 novel). Of course the deck is stacked with a double dose of Oscar winners, Tandy and Bates. Around these two is built the story that's told in the present. Evelyn Couch (Bates) is a repressed, overweight Southern housewife who, by chance, meets Ninny Threadgoode (Tandy). Ninny's able to size up Evelyn from the start and latches on to her and relates the stories of Idgie Threadgoode (Masterson) and Ruth Jamison (Parker), colorful family characters from the 1920s and 1930s. Idgie was a wild tomboy for whom Ruth was supposed to serve as a model of proper womanhood. But, ironically, the reverse happens and Idgie is the one to indoctrinate Ruth into the joys of independent selfhood. In much the same way, Ninny's companionship is able to draw Evelyn out of her self-abnegating puddle of Southern femininity. Masterson is extraordinary in her portrayal of the unconventional Idgie who serves as an inspiration for both Ruth and Evelyn. But no matter how captivating her depiction of free-spirited womanhood (and it is very captivating), there is a level of unbelievability here that makes you suspect that if this unmarried woman truly wore those extremely modern-looking shorts and culottes in the '30s and played poker and hung out in honky-tonks that she might very well have been burned at the stake. And thus begins Fried Green Tomatoes' narrative problems. While the characters it presents are absorbing and colorful, the specifics of their lives and situations are frequently vague and unclear. One also suspects that there is a great lesbian love story here that's screaming to come out. I've been told that the movie is faithful to the book's heterosexual slant -- but just because a work claims to not be something, that doesn't necessarily make it true. I swear to you that Avnet's camera lingers on displays of affection between the mannishly dressed Idgie and the femininely groomed Ruth. Only at the close of the movie do we learn that Idgie and Ruth definitely sleep in separate bedrooms. There is an unacknowledged romantic subtext at work here and the denial of its obvious presence gives the movie a teasing, self-deluding tension. The story of Idgie and Ruth is a lot darker with its deaths, wife abuse and pain than the humorously fashioned contemporary story of Evelyn and Ninnie. (And when seen in light of 1991's Thelma & Louise one has to wonder if there's a trend toward the film depiction of women's retaliatory murders against violent men.) So while Fried Green Tomatoes often veers between being too pat and too vague, too obvious and too unclear, too much of the “I laughed, I cried” school of storytelling -- it still has a charm that stems from its vivid and unique characterizations. 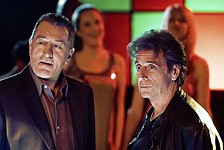