It's not as if anyone had any illusions about this movie. From the first frame of the first trailer, it was clear For the Boys was intended as a vehicle to transport Midler back to the days of her early success as a raunchy songstress with style, or as she would have it: “trash with flash.” This is not a bad thing; many of us miss the Divine Miss M, but we get only flashes of her here. Instead, For the Boys represents a continuation of Midler's distressing propensity to throw herself into mediocre projects. She's even done this before with Rydell in The Rose. She should know better, but Caan fares even worse in the role of second banana to Midler. (One wonders who said, when the call went 'round for a song and dance man, “Get Jimmy Caan.” That person makes too much money.) Caan was set up, all they wanted was someone Midler could steamroller at every opportunity. Dare I say, Caan's performance was a little flat? From here it's best to move on to the plot, but there isn't much to work with. The thing is tacked together with a framing story about a television show featuring the reunion of old stage and TV stars, Midler and Caan, whose characters were grown from cells obtained from Lucy and Desi, George and Gracie, Crosby and Hope, and maybe even a little Fred and Ginger (certainly the story owes much to Fellini's Fred and Ginger). Unfortunately, the two have not spoken for years and when a young gofer is sent with limo to collect Midler, she informs him she's changed her mind, she won't do it. “Why?” asks the young gofer, providing Midler with a golden opportunity to flash all the way back to the first time she met Caan and reminisce to their fateful last days together as a team. Well, it's too bad the plot is so unoriginal, and it's a shame the filmmakers so cynically grabbed at every tear-jerking cliche floating out there in the post-WWII collective consciousness, but it's downright evil that they made Midler look so godawful. When first seen, she looks like a malignant old frog in a tatty wrapper. She only looks like herself in the first flashbacks, and what seemed a refreshing willingness to allow Midler to look her age is actually a weird trap the film sets for its star. The logic goes something like this: if, when she first meets Caan, she's supposed to be 25 or so, but she really looks 40, well, when she's supposed to be about 75, we'll make her look as if she's 160. Worse, Caan doesn't age at all until the end when he looks, oh, about 100. Makeup as acting. But Midler doesn't need to do this, all we want is for her to be her. The few really fine moments Midler does have, a perfectly tossed wisecrack, a well-placed eye-roll and a well-sung song or two happen mostly in the first part of the film, giving us plenty of time to lament what we have lost and count the wrinkles in the stars' vandalized faces. 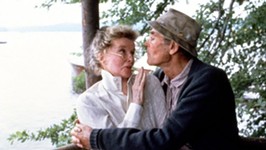