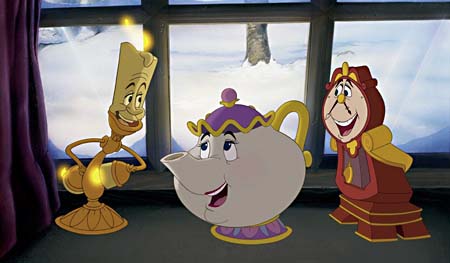 Every time a new Disney animation features comes out, their publicity machine cranks up and claims that the Disney of old has returned. Until recently, that's been just a pitiful crust thrown to the masses to keep them from rioting, as are the periodic and very cynical re-releases of Disney classics, but with the release of The Little Mermaid, it looked as though the spirit of Walt might be returning. Beauty and the Beast, one of Disney's latest animated features is even better than The Little Mermaid. At the same time, it's vaguely disappointing. Disney artists use computer animation to heighten the hand-colored effect of cel animation rather than succumb to the cold allure of computer realism. Using the form of the stage musical, Beauty and the Beast succeeds where interim Disney efforts have failed because it has good music and clever lyrics. However, the music could be better and there is only one magical set piece – a big production number featuring dancing cutlery. Perhaps adults will always be slightly disappointed because, well, like Peter Pan, they've grown up. Certainly the children in the audience gasped, cried and laughed without reservation. But also Disney has, as usual, rewritten the fairy tale to reflect their own values, abandoning the fascinating psychosexual elements of Beauty and the Beast that make it, like all traditional fairy tales, a device for making children aware of scary realities like sex. (Realities that have been pretty damn scary for Disney as well). Rather, the message of Beauty and the Beast is a very safe and very obvious one: “look beyond the superficial appearances.” There's also a little pseudo-feminism thrown in. Our Beauty, Belle, is not content to marry a big hulking village boy. She wants something more – like, to marry a prince. Well, gee, becoming a princess could be a good career move and it certainly is lucrative. Far from conjuring up images of a rough, primitive and compelling force, our beast is more like a big ol' dog, but he is vastly preferable as a beast than as a handsome prince (which should provide some insight into my romantic problems over the years). In the Disney world view, happily ever after does not mean growing up it just means moving over, trading dad for a prince. But, to claw our way back to the point, Beauty and the Beast, is a partial return to form for Disney and regardless of what this jaded adult may think, it is a thing of beauty for our kids, something they deserve. Actually, they deserve better, and Beauty and the Beast at least offers the promise they may get it.